Ozekhome frowns at DHQ’S declaration of IPOB as terrorist organisation 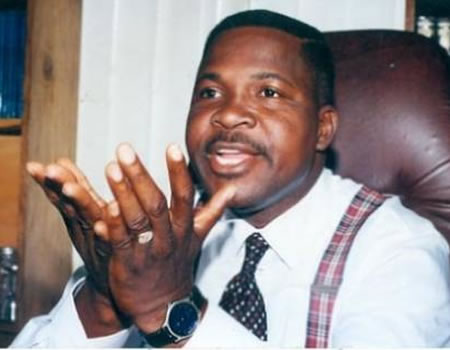 A constitutional lawyer and human rights activist, Chief Mike Ozekhome (SAN) has kicked against the declaration of the Indigenous People of Biafra (IPOB) as a militant terrorist organisation by the Defence Headquarters.

The military authorities on Friday declared IPOB a “militant terrorist organisation” in Nigeria.

The Defence Headquarters (DHQ) had, in a statement in Abuja that IPOB poses security challenge to the country by clandestinely and actively terrorising the general public.

But in his reaction, Chief Ozekhome said he do not believe the instances cited by the Defence Headquarters justify declaration of IPOB a terrorist organization.

The constitutional lawyer said the last time he checked, he, “can’t remember any of such organizations operating in the country being declared terrorist organizations.

“We must surely have and operate two sets of laws for two sets of peoples in Nigeria. A government should be seen to be fair to all component parts of Nigeria”, Chief Ozekhome said.

He said the Section listed such acts of terrorism as the formation of a Biafra Secret Service, claimed formation of Biafra National Guard, unauthorised blocking of public access roads and extortion of money from innocent civilians at illegal road blocks.

SPONSORED: How To Get Rid Of Premature Ejaculation and Weak Erection Permanently

‘I will work with FCT minister to achieve Buhari’s agenda’