Oyo Unrest: Of Igboho, Fulani herdsmen and the state government 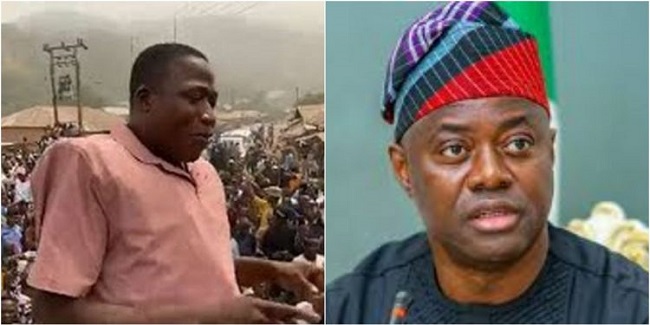 It was Aaron Sorkin, an American screenwriter and playwright who said, “We live in a world that has walls and those walls need to be guarded by men with guns.” For me, It means: for us to feel secured in our world, we must have the walls heavily protected. This protection is what is absent- as security- in Oyo State, today.

Oyo State, if not the leading, has been the epicentre of kidnapping, marauding, maiming and unlawful grazing in the southwestern part of Nigeria. Series of bloodcurdling, dastardly activities of some Fulani herdsmen have been reported in, especially in the Ibarapa and Oke Ogun regions, the state.

A resident of Igana, Mr Rasaq Gbolahan, said, “A day to Christmas, sadness invaded the house of a man called Pastor in Ìgànná. Ìgànná is a town in Òkè Ògùn. The pastor was shot in Ìlerò, on his way to Ìgànná, after a night vigil or so in his church. They brought his corpse to Ìgànná, and his children stared at their father’s corpse, their eyes punctured by enormous sadness.”

On Tuesday, February 7, 2018, Saki town, Oke-Ogun area of Oyo State was enveloped by pandemonium after suspected Fulani herdsmen killed the Officer-in-charge of the Special Anti Robbery Squad in Saki Area of the Oyo State Police Command, Sheu Magu, and a member of his team.

Gruesomely, on Friday, December 11, 2020, Dr Fatai Aborode, the CEO of Kunfayakun Green Treasure Limited and a chieftain of the People’s Democratic Party (PDP) in Oyo State was murdered in his farm, by suspected Fulani herdsmen, along Apodun road, Igangan in Ibarapa North Local Government Area of the state. Again, this pronounced and affirmed the lamentable security situation in Oyo State.

These wanton killings and abductions of Oke Ogun people are not limited to Ìgàngàn. There are other cases of unheard and unrecorded cases that happen, frequently, in Ibarapaland and other zones of the state. However, the state government has been accused of being lackadaisical towards this negative trend.

Frustrated by the incessant killings, kidnappings, and destruction of farms allegedly being carried out by herdsmen in Ibarapaland, Sunday Adeyemo, a popular Yoruba activist popularly known as Sunday Igboho, last Friday 15 January 2021 stormed the Fulani settlements in the area and asked them to leave within seven days.

As threatened by Mr Sunday Adeyemo, on Friday, January 22, 2021, which marked the expiration of the ultimatum he had issued for the ejection of the Fulani herdsmen in Ibarapa Land, Igboho visited Igangan. Consequently, several houses belonging to the Seriki Fulani of Oyo State, Alhaji Saliu Abdulkadir, were allegedly set on fire by aggrieved youths in Igangan in order to enforce seven-day notice to quit that Mr Igboho had previously issued to the Fulani herdsmen in the area. Tension rocked the area and unconfirmed reports have it that some persons were killed and properties worth several millions of naira were set ablaze during the clash which occurred that evening.

Incontrovertibly, there comes a time when the people will resort to self-help no matter how crude and anti-law their tactics and strategies to confront criminals whom the government has consistently failed to protect them against. For example, in the presence of our teacher, you slapped me and our teacher did nothing. The next day, you did again and nothing was done. Be assured I wouldn’t mind the presence of our teacher before I would ruthlessly retaliate against your attack the next time you tried to assault me. Protect me or I protect myself. The moment you leave people to protect themselves, you should expect unrest. Any serious government wouldn’t toy with the security of its state, and this is what is playing out in Oyo State.

Whenever state actors can no longer protect its citizens, non-state actors like Sunday Igboho and his ilks will always come to fill the void: and the void may be ruthlessly and recklessly filled.

Importantly, the herder-farmer and the residents of Oyo state’s imbroglio requires a deeper reflection and a more inclusive approach while farmers and herders are properly construed as crucial components of the needed food security. Nigerians (Fulani and their hosts) should stop resenting and killing one another.

Markedly, the State Government needs to win the trust of the people on security by strengthening its security system and assuring the people of their safety. Else, a Robin Hood (Igboho) and his band of outlaws would become the nemesis of the Sheriff of Nottingham.

Finally, it will be leading and instructive to close in on the didactic words of Bahá’u’lláh, a Persian religious leader, and the founder of the Baháʼí Faith, which advocates universal peace and unity among all races, nations, and religions, where he remarked, “The well-being of mankind, its peace and security, are unattainable unless and until its unity is firmly established.” It is only where security is well-established and functional that peace reigns. Wherever peace reigns, progress will be instituted.

The British Parliament at the Westminster Hall held a debate on ‘e-petition 554150, relating to Nigeria and the sanctions regime’ on Monday. The government of the United Kingdom has however responded…Oyo Unrest  Oyo Unrest

The surprise visit made on Friday night by the leaders of the ruling All Progressives Congress (APC) to former President Goodluck Jonathan at his residence in Abuja triggered a stir in the major political camps, resulting in at least four possible theories..Oyo Unrest  Oyo Unrest