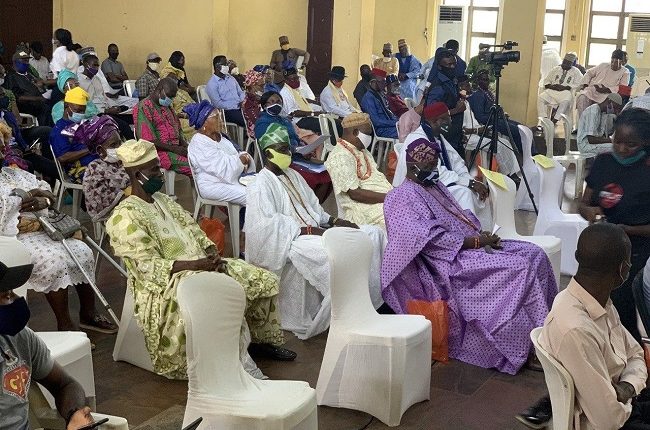 The Oyo State Containment and Decontamination Project, on Thursday, carried out a sensitisation programme to educate stakeholders on preventive measures on COVID-19 in order to curb its spread.

The Deputy Vice-Chancellor on Research, Innovation and Strategic Partnerships, Professor Olanike Adeyemo, who was the keynote speaker at the town hall meeting noted that the virus which is real has wreaked havoc globally, affecting all sphere of the world (Ibadan inclusive), invariably putting everyone at risk of contracting it.

According to Adeyemo, “This is why the Seyi Makinde government set up the Containment and Decontamination Project in the state so that everyone can be taken care of.

“A few days ago, the state government trained environmental health officers and even gave them seed grant for the purchase of chemicals and logistics. These health officers fumigate homes of persons who have tested positive for COVID-19.”

She added that the government has also introduced the self-policing method to curtail COVID-19 rather than using security agents to enforce compliance adding that a compliant form had been made available to report violators of the guidelines.

“Before the introduction of the police, people were living fine, that is why we are using the self-policing method. When going out, we should always use facemasks and when we see others not using them, we should ask them to.

“Groups can also sanction their members who fail to adhere to these measures because for now, there is no cure for COVID-19, so we must make use of alcohol-based sanitiser or wash our hands with soap and water, maintain social distancing and stay at home when there is no need to be outside.

“We should not wait till someone close to us dies from it before we believe the virus is real.”

Speaking on the essence of the stakeholders meeting, Adeyemi said “Our expectations for bringing these people together is to show them that we don’t even have up to 50 per cent compliance in Oyo State and all of the people that are here are leaders in their own rights and we want them to know that they need to exert that influence over their network to enforce compliance of all the preventive measures of COVID-19.

“We need to be responsible and that is why we have come here to actually extract a commitment from them and not only that, we have what is called compliance reporter which is a citizens App for self-policing. All the pictures you are seeing here today were not taken by us but by ordinary citizens who sees that the right things are not done there and then they will report.”

Adeyemo further called on religious organisations, owners of businesses and corporate organisations in the state to take responsibility by immediately embarking on fumigation of their premises to prevent the spread of the virus.

In their response, the Oyo State Chairman, Christian Association of Nigeria, Apostle Joshua Akinyemiju, Grand Sheik Fatai Alaga who represented the Chief Imam of Ibadan, the Aseyin of Iseyinland and other stakeholders present at the town meeting promise to abide with the guideline put in place the state government. They agreed to decontaminate their communities, schools, banks, churches, mosques, malls etc.

Earlier in his welcome address, the Deputy Chief of Staff to the state governor, Mr Mojeed Mogbonjubola, said the containment project was the goodwill of Governor Seyi Makinde to curtail the spread of COVID-19 in all zones in the state.

No organisation can succeed without security – Ajaokuta sole administrator