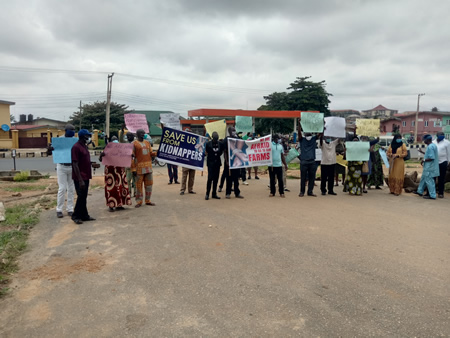 Poultry farmers in Oyo State on Monday staged a peaceful protest over what they described as incessant kidnapping of their colleagues, stating that the development has sent shivers into the spines of many of them as they are apprehensive of going about their normal businesses.

These kidnappings according to the farmers took place at different locations within Ibadan metropolis. They are Arulogun/Oritamerin,  Saagbe, Olanla Obe and Badeku.

Speaking on behalf of the farmers, the Chairman, Agro-Summit group, an arm of the Poultry Association of Nigeria (PAN), Oyo State chapter, Pastor Kayode Okunowo, told journalists that in the last two months, six poultry farmers have been kidnapped and a huge sum of the money was paid as ransom.

ALSO READ: You must submit your voters register ahead of primaries, INEC tells political parties

“The pattern with which the kidnap was carried out was also alarming. When they pick somebody and the ransom is paid, they will pick another person that same day.

“The problem started on Monday, March 2, 2020, when a female farmer was kidnapped on her farm and was released the following day.

“On the same day, another female poultry farmer was kidnapped and was released the following day.

“A week after, these kidnappers moved their activities to Badeku area near Egbeda where another female farmer was kidnapped alongside her sister who was on a visit to the farm. They were released four days later.

“The latest ones just happened on Friday 22nd May 2020, and the victim was released on Tuesday 26th May at night, while another was kidnapped the following day and was released on Saturday 30th May.

“The situation we have at hand has compounded the problem COVID-19 has created in the poultry sector as it is a known fact that we have lost a lot of money to the pandemic.

“We have involved the police but there seems to be no end in sight to the problem. We have met with the Commissioner of Police, a committee was constituted but up till now there is no change and this is the reason we are out this morning to plead with our governor, Mr Seyi Makinde to please come to our aid.

“It is on this note that we are calling on the governor to please intervene in this matter so as to put an end to this problem.”