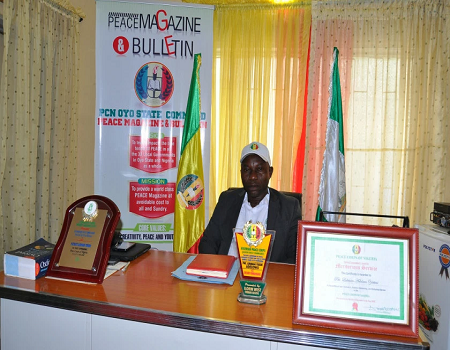 Yekini’s posting was as a result of restructuring currently going on in the agency.

He was transferred from Kwara State Command where he had served as Commandant for years.

The new Commandant who is a product of the prestigious University of Lagos where he studied Surveying Engineering, is an articulate speaker and oratorical leader.

He was at various times Camp Commandant including Ode Omu camp in 2016 and others.

Since his resumption, Patriot Yekini has  embarked on a state tour which began on Thursday, 18 July 2019 with Egbeda, Ido, Ona-Ara, Lagelu, Akinyele and their LCDAs Commands and to proceed to Ibadan major cities comprising; Ibadan South West, Ibadan North, Ibadan North West, Ibadan North East, Ibadan South East and Inter cities; Oyo, Ogbomoso, Oke Ogun and Ibarapa Commands to familiarise himself with the Officers and also to give them up-to-date information on the state of the organisation.

The commandant expressed gratitude to the National Commandant of Peace Corps of Nigeria, Amb. (Dr.) Dickson Akoh for his passionate drive towards ensuring Nigerian youths are engaged in various areas of human development.

He also disclosed that the bill to establish the Nigerian Peace Corps was reintroduced and given a preference to be among the bills to be discussed in the first sitting of the 9th Assembly of the Federal House of Representatives following the incessant killings, kidnapping, banditry threatening the nation’s security.

The security chief urged all officers in the command to discharge their duties patriotically in accordance with the mandates of the organization as they look forward to the successful adoption of the Nigerian Peace Corps Bill by the federal government to become a government paramilitary agency.

Boko Haram: Senate to visit Borno over killing of residents