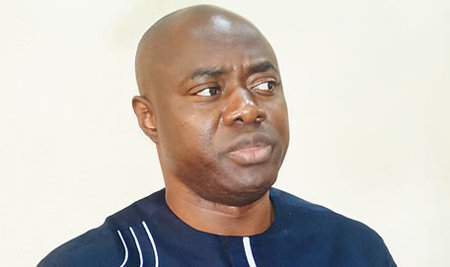 One week after it won the Ibarapa East Constituency by-election, the Oyo State chapter of the Peoples Democratic Party (PDP), was, on Saturday, hit by a fresh crisis capable of tearing it apart ahead of the 2019 general election.

The fresh crisis came following the removal of six names from the list of state executive elected at the state congress late last year by the Uche Secondus-led National Working Committee (NWC) of the party.

Affected were the state secretary, Alhaji Wasiu Emiola (from Accord), who was replaced with Mr Wasiu Adeleke; the state organising secretary, Y.A Yinusa (from old PDP), was removed for Mr Alagbe Taiwo; and the financial secretary, Abiodun Ekolo, was dropped for Mr Akeem Arinola.

Sunday Tribune gathered that three ex-officio members of the state executive were also dropped from the list as contained in an advertorial published yesterday and signed by the party’s national organising secretary, Colonel Austin Akobundu (retd).

All the fresh additions into the state executive list are from the camp of one of the governorship aspirants in the party, Seyi Makinde, while those dropped were elected into the party from Accord and the old PDP.

It was gathered that the development did not go down well with the majority of the party leaders and members who felt it would scuttle local arrangement being made to resolve the disagreement that arose from the congress.

The aggrieved leaders also felt that with two strategic positions —state secretary and organising secretary —handed Makinde’s group, “the ground is being undemocratically smoothened by Abuja for Makinde to emerge as the party’s candidate at all costs.”

The NWC, had in February this year, mooted a 14-12 sharing formula for the state executive between Makinde’s group and other groupings among the five legacy parties that coalesced to form the new PDP.

About a month ago, an NWC delegation led by the deputy national chairman, Elder Yemi Akinwonmi, visited Ladoja and other leaders in Ibadan and told them the proposed tinkering with the duly elected state executive was an error and apologised to the leaders, pledging to allow states handle disagreements that may arise within their domains locally.

But in the advertorial, the NWC anchored the replacement of some of the state executive was recommended by the appeal panel which looked into the complaint that arose from the state congress.

Although the new executive members have been invited to Abuja for inauguration tomorrow, Sunday Tribune gathered that most of the 27 members of the executive have resolved to boycott the event.

Leaders of the party and former governor, Senator Rashidi Ladoja, and others like Senator Olufemi Lanlehin, Senator Ayo Adeseun, Dr Saka Balogun, Chief Sharafadeen Alli and others have expressed disgust at the decision and are said to be weighing options before them.

The leaders concluded that with the decision of the NWC, it was evident that Secondus did not want Ladoja and other leaders in the party, a development that leaves them with either dumping the party or instituting cases in court to reverse the decision.

Cholera in the college: Students blame govt for refusing to repair faulty borehole