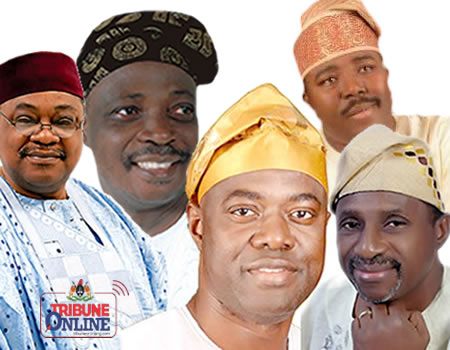 Share
ALL things being equal, the coalition of opposition parties in Oyo state is set to form a government of unity for the next dispensation in Oyo state to dislodge the ruling party, All Progressives Congress (APC) ahead of Saturday, March 9 poll in the state.
This was disclosed by the gubernatorial candidate of Social Democratic Party (SDP), Chief Bolaji Ayorinde in an interview with journalists at Ondo street house of the former governor of the state, Senator Rashidi Ladoja, on Friday.
In attendance at the meeting are the gubernatorial candidate of PDP, Engineer Seyi Makinde, ADC candidate, Chief Femi Lanlehin, Barrister Sharafadeen Alli of Zenith Labour Party (ZLP), Chief Ayorinde and High Chief Rashidi Ladoja, some political leaders across the parties among others.
The brief meeting was held behind closed doors for about 90 minutes agreed to continue the discussion tomorrow (Saturday) and reach an agreement on what it described as planned ‘government of unity’.
Surprisingly, the initiator of the proposed coalition, the Action Democratic Party governorship candidate, Ex-Governor Christopher Alao-Akala was absent at the meeting.
Akala’s absence at Friday meeting fuels speculations that the former governor was yielding to overtures from the leadership of the ruling party outside the state.
Otunba Alao-Akala defected from the APC late 2018 after his failure to clinch the gubernatorial ticket of the party in the state.

ALSO READ: Students troop out to welcome Alao-Akala in Iseyin, give him award of best candidate

Ayorinde also revealed that the meeting continues tomorrow Saturday, by 12 p.m, noting that all stakeholders are expected to sign a document as agreed by all parties.
The document, which Ayorinde said its with him while speaking said it involves areas of agreement by all stakeholders which is to be signed by all parties on Saturday.
In his short remarks, the SDP candidate, Bolaji Ayorinde said the proposed talk “is not a merger but plans to form a government of unity.” He added that all the necessary documentations and agreement has been reached but would be finalise at the Saturdays (today’s) meeting.
He noted that many other parties in the opposition in the state are daily showing interest to be part of the plans and they are been accommodated.
He denied that the absence of Akala stalled the meeting from finalising an agreement today, as initially speculated, but the need for more cohesion and integration of other interested parties.
Also, the PDP candidate, Seyi Makinde  after the meeting said the meeting was fruitful and progressive but noted that they have agreed to continue tomorrow (Saturday) to finalise talk.
He expressed optimism that all arrangement and agreements have been reached but awaiting final ratification of all concerned opposition parties.