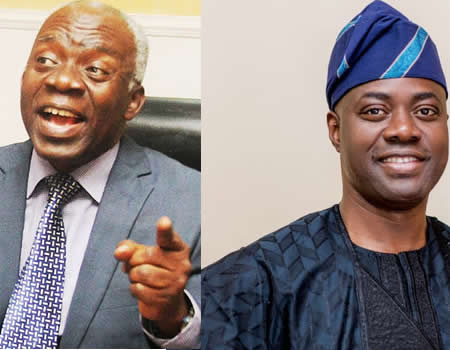 Human Rights Lawyer, Femi Falana waded into the local government crisis in Oyo State, on Monday, urging Governor Seyi Makinde to either allow the sacked elected Chairmen to serve out their tenure or pay them off if they won’t be allowed to complete their tenure.

Falana who held that caretaker chairmen were unknown to the nation’s constitution, charged Makinde to rather speed up the process of conducting a local government election in the state.

These were some of Falana’s remarks during the maiden edition of Emeritus Professor Muyiwa Awe Annual Memorial Lecture, held at the University of Ibadan, on Monday.

Responding to journalists on way out of the local government crisis in Oyo State, Falana said: “The governor will have to speed up election of Local Government officials because the caretaker committees are unknown to the constitution of the Federal Republic of Nigeria.”

“Once the Local Government chairmen have been elected, they have to serve their tenure and if at all you are not allowing them to finish their tenure, you will have to pay them. This is the position of the law.”

Meanwhile, Attorney General of Oyo State, Professor Oyelowo Oyewo, on Monday, said the return to office of the sacked Chairmen of local government and local council development areas in the state will be guaranteed by a court order to that effect.

This is as Oyelowo, who spoke on a Channels Television programme, noted that there was no particular court case instituted against the appointment of caretaker chairmen by the Governor Seyi Makinde led government.

Describing the local government crisis in the state as a combination of politics and legality, Oyewo, however, said it looked forward to the court rulings on its injunction filed against the Attorney General of the Federation and five others and its appeal against a court judgment obtained by the sacked Chairmen against Oyo State governor.

He said the state government will abide by a court judgment that declares its appointment of caretaker Chairmen as null and void and calls for a return to the status quo.

Oyewo, however, said the state government was keen to conduct local government elections as soon as the ongoing court cases are dispensed with.

“The bottom line is that the administration of Governor Seyi Makinde is a rule of law administration. If a judgment comes out of the court directing that our action is null and void, go back to the status quo, that will be done.

“Even with the action to appoint caretaker chairmen taken by the government, there is no instituted action against the action of the governor of Oyo State, Seyi Makinde, till I speak.

“What everybody wants is for the state to be able to resolve this matter, both in terms of the legality and political process. Within a short time from now, we hope to be able to conduct elections and have the administration of local governments properly running as it is required,” Oyewo said.

Speaking further, Oyewo said the Supreme court judgment being alluded to by the Attorney General of the Federation, Abubakar Malami, in a letter to the state government, was not precisely to be enforced upon Oyo State.

Mentioning that there were some other states running local government using caretaker committees, he accused Malami of being partisan by writing the Inspector General of Police to enforce the judgment in Oyo State.

He described Malami’s involvement as subjudice, noting that the state government was in court to challenge the judgment obtained by the sacked Chairmen against the Oyo State governor.

“You don’t write a letter to the Chairman of a party in a state directing the governor. We run a federal government and this has been settled by the Supreme Court and sorted during the regime of President Olusegun Obasanjo when there was a dispute of creation of local government and the government withheld.

“The Supreme Court said if you have such issues, you go to court and that is what we have done. We have gone to court.

“The state government went to court because, with respect to the local government, we believe that the AGF was not properly briefed.

“If he were aware that the matter was subjudice, then he will not take such wanton, liberal use of his powers. His powers are guided by law, the constitution of the land, and as interpreted by the courts,” Oyewo said.