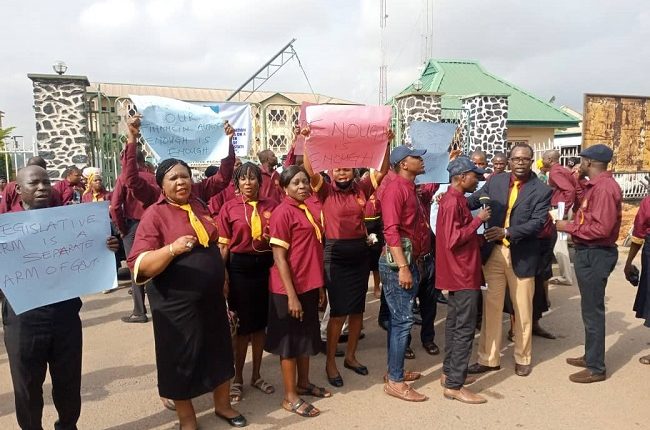 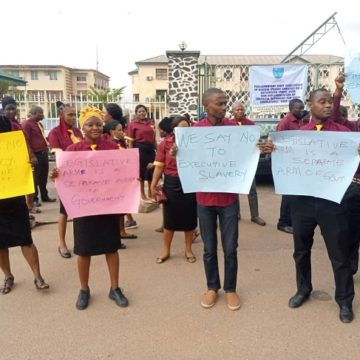 Staff of the Oyo State House of Assembly, on Tuesday, began an indefinite strike over the non-implementation of financial autonomy for the legislative arm of government.

The staff under the auspices of Parliamentary Staff Association of Nigeria (PASAN), Oyo State chapter, described as baffling the fact that financial autonomy was still not guaranteed the legislative arm despite the stipulation if section 121(3) of the 1999 constitution and executive order 10, 2020 by President Muhammadu Buhari.

Tuesday’s strike commencement had been preceded by a protest by the legislative staff who shut and blocked all entrance gates into the state Assembly complex.

Dressed in their branded PASAN uniform, the protesters bore placards with inscriptions to include, “Give us our autonomy. Enough is enough”, “We say no to executive slavery”, “Legislative arm is a separate arm of government”, “AGF, implement Order 10, 2020”, “Legislative financial autonomy is a constitutional right”.

Chairman, Oyo PASAN, Mr Yemi Alade said the action was in compliance with the directive of the national leadership of the association.

Alade also accused the Nigeria Governors Forum (NGF) of delaying the implementation of financial autonomy for the legislature.

Another agitation of the Oyo PASAN staff is that the unified salary structure for all legislative staff (CONLESS), approved by the Oyo state government since 2013, should be implemented by Governor Seyi Makinde led administration.

Alade said: “We are fighting for the non-implementation of our financial autonomy. It is a provisional constitution of the Federal Republic of Nigeria. We observed that with the current emasculation of the legislative arm of government, there can be no true democracy.

“The bill has been passed since 2018, then in May 2020, President Muhammadu Buhari also capped it up with a Presidential Order 10, but, up till now, they are yet to implement it.

“And this is a fundamental provision of the constitution which has been relegated to the background.

“As a staff of the House of Assembly, if there is no true democracy, no independent, it will affect the democracy of the country. It is affecting the entire country, not only the staff of the House of Assembly because the principle of separation of power stipulates that each arm of government must act separately and if there is no financial autonomy, all other arms of government would be in slavery to the executive arm.

“Our grievances are against both the state and federal government. There is a presidential order that mandated them to implement this financial autonomy but the Governors Forum are the ones behind the non-implementation.

“And we want to know if there is any other law or individual who is greater than the constitution of the country, that is why we had to come out to embark on the strike because, if there could be a presidential order which was not followed, then there is a serious problem in the country.”

Addressing the protesters, the Speaker of the Oyo State House of Assembly, Honourable Adebo Ogundoyin appreciated the legislative staff for taking up the fight for financial independence of the legislative arm thereby helping to deepen the nation’s democracy.

He said the conference of Speakers was engaging the governors’ forum on the implementation of financial autonomy for the legislature.

“We understand the agitation by PASAN across the federation and I can assure you that the speakers’ forum has been working on the autonomy for the States House of Assembly in order for us to achieve this during our tenure.

“We’ve had a series of meetings at the conference even with the Governors forum. With what’s on the ground and the progress we’ve made we are almost at the finish line.

“Details of the meeting at the ongoing Governors forum will be released at the appropriate time. I thank PASAN for the steps taken because it has been long overdue for the Legislative Arm of Government to have its financial autonomy.

“The only stumbling block is that the Governors’ forum wants to go about the financial autonomy at the same time and same method of implementation.

“No state will go about it in different ways because that will bring about uniformity and once that arises some states will be at an advantage as compared to some other states.

“The general consensus is that we will use one method for all the states and that will bring about rapid development and independent for the States House of Assembly nationwide.

“The truth about this situation is that now that it has gotten to this point it could have been resolved long before now but it is unfortunate that the PASAN from the national level to the state have taken a unilateral decision in order to make the strike indefinite until the financial autonomy is approved. The situation is not unique to Oyo State but across the federation.”

In the penultimate week, (March 7 – 13), there were 2,300 cases, a reduction when compared to the 2,817 recorded in the previous week’s (February 28 – March 6)…Oyo Assembly workers begin indefinite strike over financial autonomy