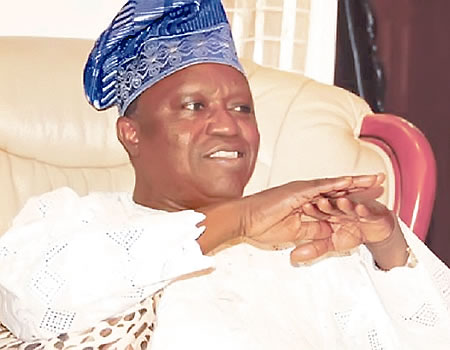 LEADING aspirant for the All Progressives Congress, (APC) governorship ticket in Oyo State, Chief Michael Adeniyi Akintola, (SAN) has promised to stimulate economic growth in Ogbomosho and its environs in Oyo State.

He made the pledge during his recent visits to leaders of the party in Ogbomosho, Oke Ogun zones ahead of the party primary fixed for next month to pick its standard bearer.

The APC chieftain noted that Ogbomosho is enriched with farm produce which could be processed into a finished product for export.

He said: “I have a blueprint on the industrialization of Ogbomosho, Oyo and Oke-Ogun based on the comparative advantage of each zone”.

“Ogbomosho has the best Cashew nut and mango fruits in West Africa. I will ensure that we have fruit processing factories in at least five places in Ogbomosho that will convert these fruits from harvesting to finished product for export. This will create thousands of jobs for our youths and empower our women financially”.

Addressing the party leaders in Iseyin, he promised that priority would be given to Ikere Gorge Dam as he noted that the moribund dam has the potential to generate electricity for Oyo State.

“If the dam is completed, it will generate close to 1600 megawatt of power and also provide irrigation for more than 3000 hectares’ of farmland in Oke-Ogun and a larger part of Ibarapa region of Oyo State.”

At an early interactive session with political leaders and elected local governments and APC wards executives in all local governments in Ibarapa zone, the aspirant restated his pledge to accord recognition to women in governance.

Chief Akintola submitted that women inclusion in governance was not a privilege but a gender fundamental right that a person like him who is a minister in the temple of justice would not compromise, saying that he would enforce Beijing declaration which mandates that thirty per cent of all public appointments be given to women.

He further noted that Nigeria, being a signatory to the Beijing declaration, women inclusion in governance is a constitutional right that must be enforced.

Earlier in his remarks, a chieftain of the party in Ibarapa, Chief Rafiu Oyegoke said the aspirant has since been adopted as their candidate by party leaders in the zone.

He described Chief Akintola as a man of integrity, who has all that it takes to govern Oyo state come 2019.

Also speaking, the APC woman leader in Ibarapa East local government, Miss Raheem Fatimo pledged Ibarapa women support for Chief Akintola”s candidature but appealed to him to use his good offices as governor of Oyo state come 2019 to promote women interest, as she expressed concern that women are always marginalized when it comes to giving them the opportunity to serve in various governmental offices.