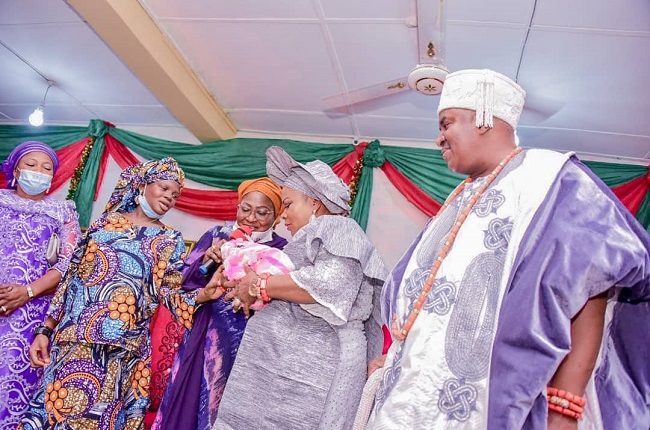 Wife of Osun governor and the president, ‘IleriOluwa Development Initiatives’, Mrs Kafayat Oyetola has reunited a mentally challenged woman, Labake Najeem, whom she picked up in an unstable condition with pregnancy in Apomu, her home town for medical treatment with the permission of the town’s monarch, Alapomu of Apomu, Oba Adenekan Afolabi.

Oyetola officially handed over the woman hale and hearty to the monarch after being away for three months for medical treatment.

During her visit to the town for an official assignment, Oyetola had discovered that Labake was mentally imbalanced, and appreciated God for the successful treatment of Labake while in her care.

Mrs Oyetola also used the medium to appreciate the professional job done by the medical personnel at the State Specialist Hospital for extending care and love to Labake Najeem during her treatment period till she became hale and hearty.

She, however, charged the people of Apomu town to support the woman by showing her love and care to and shun all forms of discrimination in order to allow her to fulfil destiny as planned by God for her and her new baby girl.

She, therefore, charged all well-meaning Nigerians to assist in salvaging the society to be a safe place to live for all and sundry.

While responding, the Alapomu of Apomu Oba Adenekan Afolabi and his wife, Olori Janet Mba Afolabi, who could not hide their feelings, appreciated the kind gesture of Mrs Oyetola over Labake and pledged their unflinching support to take proper care of the girl and her new baby as their own child.