Oyetola swears in five Judges, charges them to discharge their duties diligently 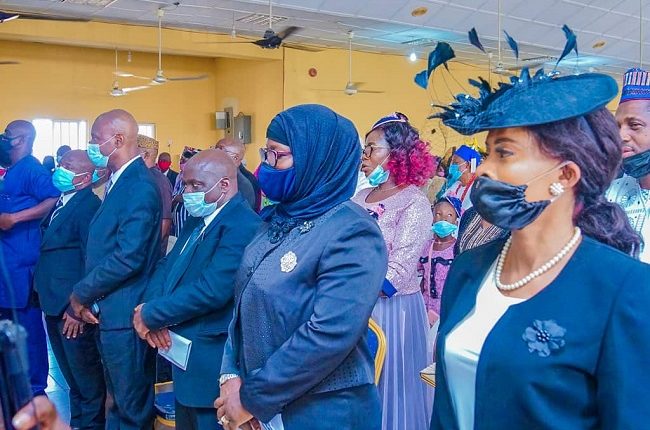 At the swearing-in ceremony held at the Multi-purpose Hall, Local Government Service Commission, Abere, Osogbo, Oyetola said the quest to fill the vacant positions was in line with the administration’s resolve to build a Judiciary that would build a just and peaceful society and ensure the socio-economic development of the State.

He said the administration would continue to seek the best hands to build the capacity and efficiency of its judicial officers, stressing that no sacrifice was too great to strengthen the Judiciary.

“Osun Judiciary has proved itself as a friend of the people and a principal player in the provision of good governance to the people through the delivery of people- and development-oriented verdicts, and cordial but uncompromising relationship with the Executive and the Legislature.

“As a government that rode into office on the strength of the people, we are committed to providing an enabling environment for the Judiciary, including improving their welfare and ensuring their independence to enable them to perform their duties effectively and efficiently as the last hope of the common man.

“It is our resolve to build Osun on equity and justice as a deliberate strategy to sustain its status as a peaceful State and to ensure that justice reigns in the face of prevailing crises in the nation. We are therefore positioning the Judiciary to join other arms of government to perform this role.

“The Judiciary has a duty to continue to build capacity to enable them to function effectively and efficiently in the new normal imposed on their profession by the Covid-19 pandemic,” he added.

The Governor who commended the judiciary for strengthening the Constitution through justice dispensation expressed satisfaction at the thorough screening process that produced the newly-sworn-in Judges who are no doubt some of the best officers of the law in the state.

He noted that the new Justices brought an aggregate of about 90 years of rich and extensive legal practice in varied areas of the law in the private sector and the public service to their assignments.

According to him, the judges carry along with them results in orientation and private sector efficiency to the established quick and impartial administration of justice in the State, saying “I am confident that, by their experience, pedigree and exposure, the new Justices are well equipped to operate efficiently in the new normal required to operate in the post-Covid-19 era.”

Charging the new Judges to discharge their duties faithfully and diligently, Oyetola said it is incumbent on them to use their experience, exposure and pedigree to effect a change in the judicial system in general and administration of justice in particular.

Speaking on behalf of other new judges, Justice Akande Babafemi Abimbola, appreciated Governor Oyetola for counting them worthy to serve the State in the high capacity as Justices of the High Court.

He pledged his commitment and those of his colleagues to discharge their duties in accordance with the Constitution without fear or favour, saying, “We shall uphold our oath to the best of our ability.

“We thank Mr Governor for approving the appointment. This is a testimony to the love that the Governor has for us as he approved the appointment despite the economic circumstance that would have delayed the process.

“So, by filling the existing vacant positions through our appointment, then, Mr Governor has once again displayed his commitment to the welfare of judicial officers and dispensation of justice, ” he added.