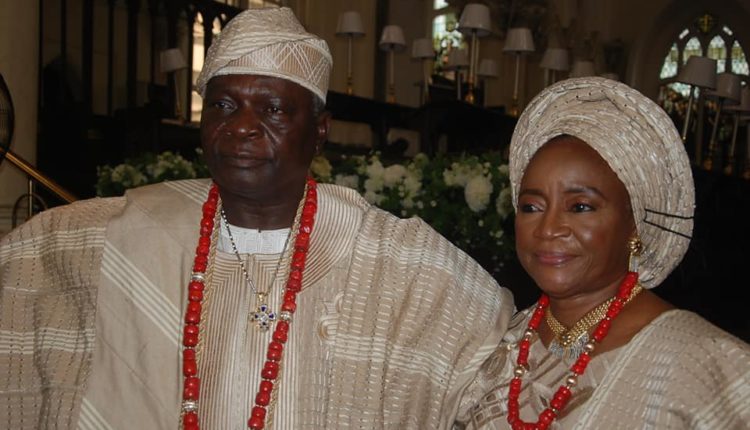 Three State governors from the two major political parties in Nigeria, politicians, captains of industry and traditional rulers thronged Okuku, Osun State on Saturday to celebrate a former governor of the state, Prince Olagunsoye Oyinlola who clocked 70 years on Wednesday.

The event was held under very strict observance of COVID-19 protocols with the reception after the service earlier cancelled by the organisers.

Bishop, Osun North Anglican Communion, Okuku, Adetoye Olaoye who delivered the sermon at the service, charged politicians at the corridor of powers to shun self aggrandizement, self- centeredness and be upright in dealing with those being governed by them to be relevant when they are out power.

According to him, Oyinlola is a good example of a good leader and an elder state man saying, 11 years after he left the corridor of power, his relevance in the society still stands as constant as the Northern star.

The clergyman also advised leaders to decry segregation, nepotism, sectionalism and tribalism in governance to make the country more virile and united.

Bishop Olaoye appealed to them to be upright, steadfast, straightforward and transparent and sincere while steering the ship of the nation saying, we will account for our deeds one day whether on this earthly surface or in heaven.

Speaking on the celebrant, the preacher described Prince Oyinlola as an harbinger of peace and outstanding personality laced with decorum and straightforwardness in conducts and deeds.

According to him, his life style is divine mercy and grace personified and immeasurable values added to the development of humanity will ever remain impeccable and recallable in the life of those who appreciate the qualities of a genius.

“Oyinlola is a nation builder and a leader of leaders in many circles. His native intelligence makes him stands tall among his peers and his proverbial knowledge distinguishes him among the knowledgeable ones”.

The man of God who insisted that, the life of the combatant is characterized ad punctuated with humility, honesty and fear of God, posited that, he remains one of the philosopher kings of the moment whose knowledge has irrigated the lives of all and sundry in this present generation and that yet unborn.

In the House of God, Bishop Olaoye likened Oyinlola to an indispensable instrument to the growth of God’s work and could as well be described as an inexplicable valuable assets to His vineyards.

He however described his wife, Mrs. Omolola Oyinlola as a strong pillar behind and beside the success of her husband saying,she is an amiable woman of substance who is full of empathy, love and care at all times.

While praying for the family, the clergy man said the glory, mercy and presence of God will forever abide with them while His divine protections will encompass them round about always.

Akeredolu said it was rare to find a person governing two different states under different dispensations.

He prayed for long life for Oyinlola while enjoining him to continue to be himself at all times.

In his own speech, the state Governor, Mr. Gboyega Oyetola described Oyinlola as a peaceful man who always upholds truth in his dealings.

Speaking through his Deputy at the event, Mr. Benedict Alabi, he further maintained that Oyinlola is a great thinker and a cool headed personality whose principles and doctrinal philosophy centre on peace making.

Also speaking, Oyo state Governor, Mr.Seyi Makinde said, “I picked one or two things from the sermon of the Bishop that governance should not be about APC or PDP and that the citizens should pray for politicians to rule with the fear of God.

“The prayer we need is that as humans and Nigerians, God should continually guide us to do the right thing. There is no governor or any political office holder that can be successful without the civil servants, so if you are praying for the political leaders, please pray for civil servants also.

“The celebrant is wise, knowledgeable and his words are full of wisdom. There was a time when some people were getting me worked up. I called him for guidance, then he said, if you see a rat stand at a distance taunting a cat, the cat should know that there is a close-by hole where the rat can escape into. After that time, I was no more disturbed and angry with those people. I devised a way to ambush the rat by digging the rat’s hole from behind.

“He is excellency emeritus. He belongs to everybody. On behalf of the government and people of Oyo State, I wish you a happy birthday and many happy returns. At 70 you in the cusp of wisdom, knowledge and energy,” Makinde said.

Oyinlola in his vote of thanks, thanked everyone who made the event a huge success while showing appreciation to all others present and all others who could not make the event but sent goodwill messages. He thanked Vice President Yemi Osinbajo, former leaders, Yakubu Gowon, Olusegun Obasanjo and Ibrahim Babangida, leaders of both the PDP and the APC who reached out to him, his colleagues in the military, captains of industry, traditional rulers and all Nigerians who continue to shower him with love almost eleven years after he left office as governor of Osun State.

The British Parliament at the Westminster Hall held a debate on ‘e-petition 554150, relating to Nigeria and the sanctions regime’ on Monday. The government of the United Kingdom has however responded…Oyinlola’s courage  Oyinlola’s courage

The surprise visit made on Friday night by the leaders of the ruling All Progressives Congress (APC) to former President Goodluck Jonathan at his residence in Abuja triggered a stir in the major political camps, resulting in at least four possible theories..Oyinlola’s courage  Oyinlola’s courage