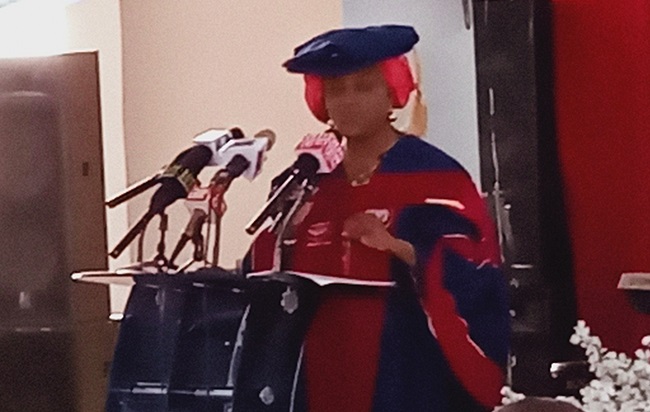 Owners of media institutions in the country must as a matter of urgency, put the nation first and rise above their personal interests.

Former Executive Director of Programmes, Nigerian Television Authority, Mrs Eugenia Abu made the call on Thursday while delivering a convocation lecture presented at the 5th Convocation Ceremony of the Salem University Lokoja

Mrs Eugenia Abu who is the Managing Partner/ Chief Executive Officer of The Eugenia Abu Media said they must be the enablers of our democratic ideals through their media platforms by providing the necessary capacities and infrastructure for their staff to perform optimally.

The lecture is titled, “Beyond the 2023 Elections: The Role of The Media in Deepening Democracy in Nigeria”.

According to her, media Aya a crucial role in shaping healthy democracy, adding that it is the backbone of democracy.

She noted that the media must peer review, how well has it carried out its constitutional assignment vide section 22 of the constitution.

“What are professional media organisations doing to help ensure the media is carrying out its constitutional responsibility? What are they doing to build the capacity of their members?

“The media must be deeply knowledgeable to be able to provide the much-needed illumination for citizens on their rights, and on issues of governance while holding leaders accountable

“It is important that different organisations give life to training the media be it on human trafficking, the physically challenged or election coverages,” she said.

According to her, voter education is critical to democracy sustenance and must not stop even after an election.

Her words, “Alarmed at the number of votes for Big brother Nigeria, an entertainment programme at one point 3 billion votes as against 96 million votes garnered by winners of the Presidential election in four different election cycles.

President Muhamadu Buhari has charged trade unions, especially ASUU to shun the weapon of strike action as a tool for pressing home demands…

It is commonly said that where two elephants engage in battle, the green grass under them will definitely suffer a lot. The incessant relocation of workers in Nigerian banks to foreign countries in the quest for greener pastures has caused serious setbacks in the banking sector in recent times…

When your name determines your life

A name represents identity, a deep feeling and holds tremendous significance to its owner – Rachel Ingber. Integrity: A name is the blueprint of the thing we call character. You ask, what is in a name? I answer, just about everything you do – Morris Mandel (1911-2009), American educator and journalist…