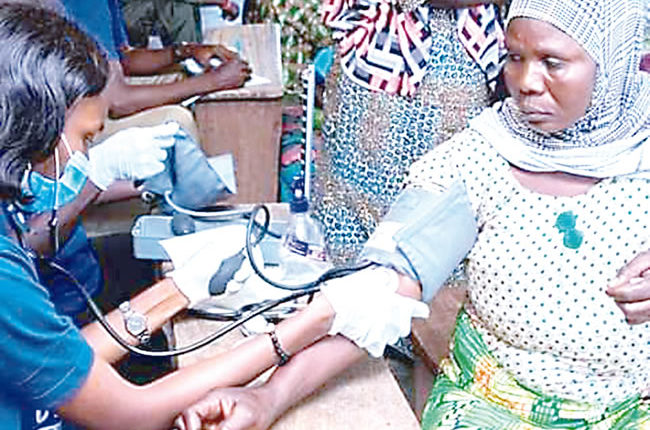 For the people of Ofiki community in ATISBO South Local Council Development Area of Oyo State, last week was a dream come true as the community came alive when it hosted a free medical mission tagged Mega Outreach 2020 that spanned a period of three days.

The medical mission facilitated by the Aare of Ofiki land, Oba Adeoye Gbenga Adigun, was in collaboration with a nongovernmental organisation; Creating Healthy Community Kinship (CHECK) Medical Mission was the second free mission since he became the king.

Ofiki community is one that has a rich historical background and is one of the towns that can lay claim to being a part of the liberation of the Yoruba race, dating back to the 18th century with Sanndo as its administrative headquarters Ofiki is a sleepy agrarian town with some modern institutions missing in some other places.

And while it has a maternity centre and a primary health care centre, the medical needs of many residents are not met because there is a limit to what they can cater for. This is why the residents were ecstatic about the three days programme that catered for people of all age groups and treated diverse medical conditions.

At the end of the three-day mission, a total of 615 people were given medical attention which covered deworming of 193 children, 142 urine and blood tests, eye analysis with 88 eye glasses distributed, provision of physiotherapy services for 68 people, 13 general surgical procedures, 33 dental surgical procedures and two cleft palate surgery by Oral Maxillofacial Surgeons.

Speaking on the mission, Oba Adigun expressed appreciation to the C.H.E.C.K Medical Mission team for their commitment and compassion throughout the three days that the free medical outreach lasted, adding that, I cannot thank the team enough for the good work they did during the three days they stayed here for the free Mega Medical Outreach in my kingdom. This is the second of its kind since my installation as the king, I appreciate them and the people appreciate the good work and how they have touched lives here.

“We know that health is wealth, this is the purpose why this mission was facilitated. It is in furtherance of efforts to touch the lives of people in my community and ensure they have access to medical service that many of them cannot afford in terms of finances and access. I remain resolute in ensuring that my people get the best to make life easier for them especially because they are less-privileged in the society based on how far they live from basic amenities.

“Life can only be good for everyone including a community head when the people are healthy and because of the peculiarity and terrain of our community especially the economic situation that makes many people ignore their health, we need opportunities like this to make things easier for them and allow them access to qualitative health.

“I thank Almighty God for the opportunity to give to the people. This is not the first time we are doing this and it won’t be the last time. I am committed to ensuring my people have the best. It is my vision to always ensure I create opportunities that will meet specific need in my community to ensure my people are given the chance to live a good life and contribute their quota to the development of the society and look out for themselves,” Oba Adigun stated.

He enjoined the people to ensure that they adhere to medical advice and instructions so that efforts made by the CHECK mission team would not be wasted, reiterating that they needed to  be committed to issues about their health especially when treatment did not cost them money.

At the end of the mission, the Aare Ofiki was appointed as grand patron of the medical mission alongside the Onpetu of Ijeru land, Oba Sunday Oladapo Oyediran, who at the penultimate week facilitated a CHECK Medical Mission to his community where free medical checks and treatments were given to over 2000 people in his community and surrounding areas at his palace.

The beneficiaries of the mission thanked their king who they said had continued to look after their welfare in every sphere and thanked the CHECK team for their love and the way they have touched lives in their community.