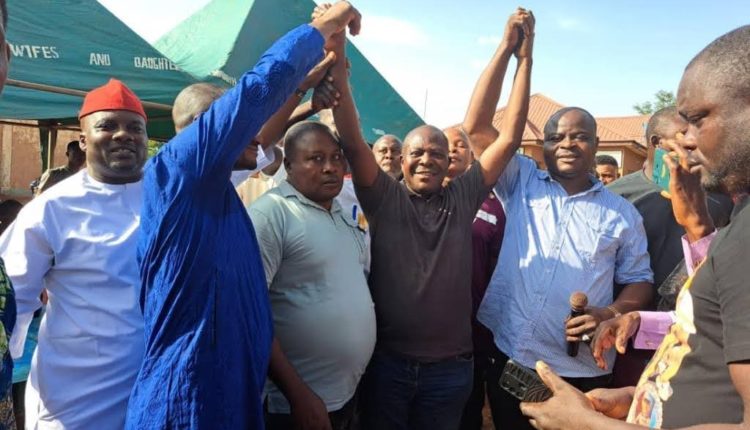 Over 5000 members of the All Progressive Congress(APC) in Kogi State have defected to the opposition Peoples Democratic Party(PDP).

The APC members defected to PDP on Sunday in Avrugo and neighbouring ward in the Igalamela/Odolu Local Government Area of Kogi state.

The former Vice Chairman of Igalamela/Odolu Local Government, Hon Collins Adama who led other party members to defect to the PDP said APC has failed Nigerians.

According to him, it is time for Nigerians to vote out bad leadership in the 2023 general election, stressing that, any mistake made now will spell doom for the nation.

Adama, who was received into the PDP family by Igalamela/Odolu Local Government PDP chairman, Hon Attai Ndamusa Salifu and the state assembly candidate, Hon Umar Zakito also said the ruling APC should be ready to pack their load from both Kogi State and at the national level.

He commended the leadership style of the stakeholders of the Local Government and praised the state and national level of the leading opposition party for electing candidates that can deliver a dividend of democracy to all nooks and crannies of the nation.

Chairman of PDP in Igalamela/Odolu Local Government Area, Hon Attai Ndamusa Salifu Achakuma in his address admonished other wards and polling units to emulate what is happening in Avurgo adding that, PDP will the 2023 general election.

On his part, former Executive Chairman of the Local Government who double as the State Assembly candidate Alhaji Zakito Umar said when he was in power, his administration executed nine physical infrastructural projects in Avrugo ward.

He listed some of the physical infrastructural projects to include the construction of bridges, culverts, boreholes, primary health care centres, and recreational centres across the length and breadth of Avrugo ward.

Zakito promised to give his people effective and people-oriented representation If elected into the Kogi State House of Assembly.

The Women leader of the Local Government Hon Mary Uyo Atebije described the former Igalamala Odolu Chairman as a man of competence capacity, and administrator per excellence, urging electorates to believe in him because he has been tested and trusted in the Local Government.

Who will be the top goal scorer at the World Cup 2022 in Qatar?