Over 25 persons escape death in multiple auto crash in Lagos

The accident, which happened around 3.00pm when many people were returning homes from church service caused a middle age woman said to be dashing across the expressway at the time, the loss of her two legs.

Others were inside a Pick-Up van with registration number BKD 208 XK and a space wagon bus with registration number LND 496 BP. Except one car said to be parked nearby, others were all coming from Sango-Toll gate axis inward Abule-Egba on the ever busy Lagos-Abeokuta expressway. And the accident caused a serious vehicular gridlock at the axis for many hours. It took the intervention of officers from the police force, the Federal Road Safety Commission (FRSC) and the Lagos State Transport Management Authority (LASTMA) to ease the traffic.

Some of the victims told our correspondents at the scene that the accident was caused by the driver of a trailer which carried a container. They said the said driver(who was apprehended and handed over to the police at the spot) was on high speed and lost control of the steering, running into the commercial passengers’ bus in it front and then rammed into three others and in the process crushed the woman’s two legs from heaps.

Our correspondent saw a woman’s sander and heavy blood stain on the ground at the scene as sympathizers were said to have rushed the owner to an undisclosed hospital for medical attention. 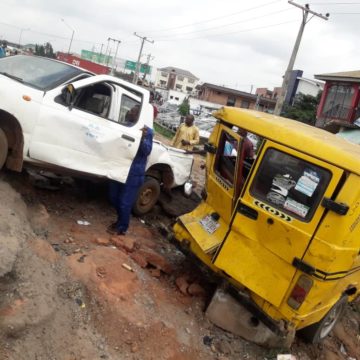 The driver of the bus, who did not want to be named, however, explained how the accident happened, saying he was coming from Sango Toll-gate fully-loaded and headed to Iyana Ipaja. Full of praises unto God, he explained further that as he was approaching Obadeyi bus stop axis on the expressway, he, just as every other motorist had to slow down to manouvre as the portion was full of big potholes and in the process, the trailer with failed break and in high speed rammed into his vehicle and cleared it off road.

It was a big stone nearby the expressway that prevented his bus with passengers inside from entering into a canal by the roadside. “Though some, especially those seated at the back seat sustained injuries, we thanked God that nobody died,” he said.

The officers from LASTMA who gave his name as Mojeed Adeniyi and that from FRSC, who wanted to be anonymous, said they received distress calls separately to come to the scene.