A multi-million Federal Government health facility was recently consumed by fire after long years of abandonment in Idogun village near Erunmu, Oyo State. TUNDE BUSARI reports the depth of loss and villagers’ disappointment.

These communities share one thing in common. The feature is a medical facility known as Idogun Model Primary Health Care Centre, which serviced the dwellers of the rural communities. In 2008 or thereabout, the joy of the people knew no bounds when the medical centre was built and about 15 trucks brought equipment to the site.

However, last Wednesday, January 9, 2019, tragedy, in company of agonies, paid unscheduled visit and torched the facility, thereby reducing the equipment, including furniture,roof and the whole premise to ashes.

Nigerian Tribune gathered that the Health Care Centre was facilitated by the magnanimity of a former member of the House of Representatives, Festus AdewaleAdegoke, an indigene of Idogun, who was then representingEgbeda/OnaAra Federal Constituency in the national assembly. 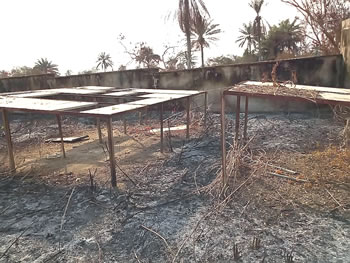 Adegoke was said to have invested all his contacts in the lower chamber in ensuring that his people back home benefited from the federal government primary health policy aimed at improving the wellbeing of rural communities across the nation as dividend of democracy.

The fire which started at five in the evening expectedly destabilized the communities with panicky residents making frantic efforts to put it out before it exploded. But the intensity of the inferno, apparently aided by the current dry season,was beyond their control, leaving them as helpless spectatorsprofusely gnashing their teeth at the raging fire.

When the day grew old and darkness descended, the bewildered people departed for their different homeswhere they continued to share and spread the sad tale with those who could not make it to the scene.

Our correspondent’s visit to the remains of the medical centre was an eye opener of sorts with the level of destruction found. Although a first look at the entrance of the hospital some metres away only showed a common vandalized and abandoned building silently crying for rescue, a step into the gate revealed a completely razed multi-billion Naira project.

Further inspection of the male and female wards, laboratory and offices left him speechless as nothing was spared except surprisingly few plastics containing expired drugs and patients’ cards and sheet of papers. The solar energy installation, which was supplying round the clock electricity to the hospital, was not also spared among other casualties of the angry flame.

It was learnt that sometime in 2016, only mother luck, vigilance and timely response of the people saved the hospital when a light fire struck. But being a market day when the axis had appreciable human traffic, the situation was put under control.

“If the 2016 incident had occurred in another day or in the night, the hospital would not have escaped then. But people rose to the occasion and quickly extinguished it. Since then there was no sign that another fire incident would be recorded, a community leader, whose farm is just a stone throw to the hospital, Elder Oyekanmi Onikorede, remarked.

The outspoken man was somehow emotional while giving account of the accident, saying that the proximity of the hospital to his farm afforded him opportunity to witness the fire and efforts made to prevent further spread.

Onikorede confirmed that the fire did not stop until the following day because, according to him, there was no fire service facility around to fight the conflagration. The 60-year-old expressed doubt in fire service vehicle reaching the scene on time to stop the fire, pointing out that the deplorable state of road that connects the communities with Erunmu is an albatross for such attempt. 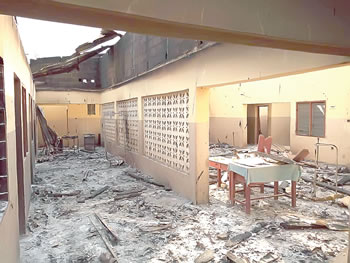 Fire service vehicle, he stated, can be functional and effective only on good roads, adding that “what we have here as roads would even force fire service official to turn back.”

Mr Wole Akintominde another residents, also expressed same frustration and said the communities seem to be living on the other side of the world, in terms of accessing basic infrastructural amenities. The 47-year-old agonised that the fire incident had robbed the communities the only government presence they feel.

“With this fire now, there is nothing we can call government attention in these communities. Even though we are not always sick because we eat natural foods and take our herbs regularly, the presence of the hospital has served as government presence among us,” he said.

The communities’ headache now is the cause of the fire with a view to preventing future occurrence in other areas. While the matter is a subject of conjecture and suspicion, there appears to be a consensus focus on one source. 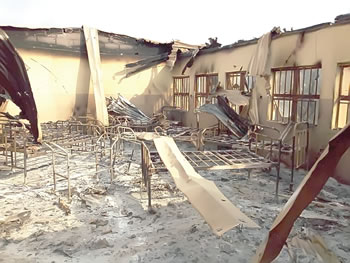 Speaking on condition of anonymity, some of the villagers pointed accusing fingers to a gang suspected to be Fulani herdsmen, whom the respondents, alleged to have penchant for indiscriminately setting bush and farmlands on fire.

“They claim that burn grass always aid growth of new grass to feed their cows. They may be behind this hospital fire. I am not saying the hospital was their target. But we know that fire naturally is uncontrollable the moment is set. I am sure they are not also happy that the fire had spread to the hospital but they can’t come to the public to confess,” an agitated farmer, who claimed to have twice been a victim of the herdsmen, said.

Further findings revealed that long before the fire incident, the Idogun Model Health Care Centre had been condemned to total disuse on account of what some villagers described as bad politics, a reason necessitating their indifference to the ongoing campaign by political parties.

It was alleged that the hospital did not function more than two years after commissioning. Specifically, when a Medical Doctor in charge named as Dr Alawode retired, no serious work was being done in the hospital.

Although some nurses, it was further revealed, used to visit the medical facility but their mode of operation was not better than skeletal service as they allegedly reported late in the morning and left few hours later.

“To say the truth is to tell you that the hospital is one of government wastages. What is the essence of an hospital that is not put into full use despite the fact that all equipment needed are available. The place had long been abandoned. It was freely vandalised, especially after the security guards had stopped to work there because they were not paid any salary,” the community leader said.

Corroborating him was one of the security guards, Mr Muniru Lawal, who said he volunteered to secure the hospital to demonstrate his excitement at the project for the communities. The 77-year old said he worked alongside one Ejaoje, both of whom worked for two years with no pay.

“We just suffered for nothing in that hospital. We used to resume work at six in the evening and leave at six in the morning under terrible condition. Yet we were happy that we had such a facility in our communities. I can still work there even at my advanced age if the government is serious. We want them to repair it and put it back to use,” he said.