Outcry over deaths of children in Gorakhpur hospital 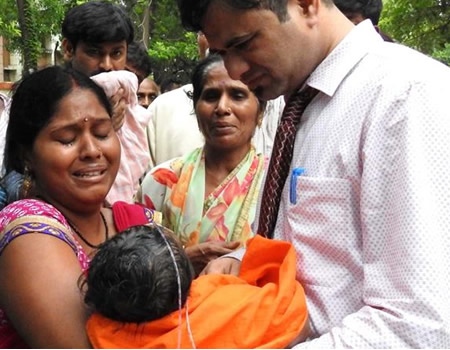 AT least 60 children have died over five days at a hospital in eastern India, with local news media reporting that the deaths occurred when a company supplying oxygen cut off supply after a payment dispute.

Authorities said on Saturday they have launched an inquiry but denied reports that a lack of oxygen had caused the deaths at the state-run Baba Raghav Das (BRD) Hospital in Gorakhpur.

“We have launched an inquiry and a preliminary report should be out today,” Anil Kumar, Gorakhpur’s divisional commissioner, told AFP news agency.

“Yes, sixty patients have died at the hospital in the last five days but we don’t think it’s linked to reports of oxygen shortage.”

The hospital, which is in Uttar Pradesh State, ran out of oxygen at 1am local time on Friday, forcing medics to use manual ventilators on patients, the Hindustan Times reported.

The newspaper said doctors made frantic calls to the supplier, Pushpa Sales, in order to restore the oxygen supply as the children started dying.

A statement by the office of Yogi Adityanath, the chief minister of Uttar Pradesh, said that all 60 deaths occurred at the hospital’s paediatric ward over a five-day period starting on Monday.

Twenty-three children died on Thursday, when, according to the statement, “the pressure of the liquid oxygen supply became low and 52 reserve oxygen cylinders were pressed into service”.

BRD Hospital had run up debts of $6.9m Indian rupees ($107,000), a sales representative at the company responsible for supplying the oxygen said.

“But the situation was managed through oxygen cylinders. The hospital administration has enough supply of cylinders in its stock. So the report about death of children because of oxygen issue is false,” Trivedi said.

Parents, however, said oxygen supply ran out on Thursday night and patients’ families were given self-inflating bags to help the children breathe.

“That’s the time when the death of the children peaked,” said Mritunjaya Singh, whose seven-month-old son was admitted to the hospital and was not among the dead.

Parmatma Gautam, whose one-month-old nephew, Roshan, died when the oxygen supply stopped, said the hospital authorities and the district administration were trying to cover up their failure to pay the bills on time.

“We saw our baby struggling to breathe and we couldn’t do anything,” Gautam told the Associated Press news agency.

The office of the Indian prime minister said via Twitter that Narendra Modi was “monitoring the situation in Gorakhpur” and was in touch with the state authorities.

The deaths and alleged circumstances surrounding the events in Gorakhpur have led to an outpouring of grief and anger on Indian social media.

On his Twitter account, cricketer Indian Mohammad Kaif wrote: “Tragic to hear loss of lives of innocent children in Gorakhpur. This is unacceptable. Incompetence [is] the main reason for such tragedies.”

“This is a story that has been unfolding repeatedly in different parts of the country,” he told Al Jazeera from New Delhi. “Public health is a major casualty of corruption.”

PDP going back to Villa ―Fayose