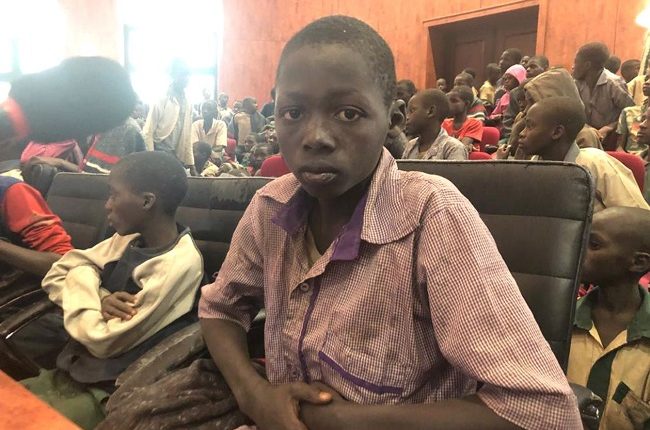 Abducted schoolboys of Government Science Secondary School, Kankara, Katsina State have said that their kidnappers demanded a total of N344million naira – N1million per head – before they were released, the Wall Street Journal (WSJ) reports.

It would be recalled that all the 344 schoolboys were released on Thursday, December 17, 2020, by the bandits who had kidnapped them on Friday, December 11, 2020.

Controversy has, however, trailed the claim that ransom was not paid by the Nigerian authorities to secure the release of the schoolboys.

KATSINA, Nigeria — It was on the third day in captivity that the Lawal brothers thought they would be executed.

Exhausted and hungry, their bare feet lacerated after long marches at gunpoint through a dense forest with more than 300 abducted schoolmates, 16-year-old Anas and 17-year-old Buhari were ordered by their kidnappers to answer a question.

“Is your family poor?” said one of the gunmen, much of his face masked by a turban. “If they are, we will kill you now. They won’t be able to afford the ransom,” he said.

The brothers, whose father, Abubakar Lawal, is a construction-industry consultant with an income of $100 a month—middle class by the region’s standards—said nothing and stared at the ground.

“We thought they would kill us there and then,” said Anas.

“That was the scariest part. We thought we’d never see our family again,” said his older brother, who is named after Nigeria’s president, Muhammadu Buhari.

Three days later, the Lawals were among the 344 students from the all-boys Kankara Government Science School who were released, a happy ending to a terrifying week in which they endured beatings, threats and deprivations at the hands of their kidnappers. Jihadist group Boko Haram has claimed responsibility for the abduction.

During their captivity, according to interviews with eight of the freed students, boys as young as 13 were forced to eat raw potatoes and bitter kalgo leaves to survive. They were seldom allowed rest, sleeping on rocky ground home to snakes and scorpions. They threw themselves on the forest floor to avoid being spotted by military jets their captors said would bomb them.

After six nights in captivity, the students were handed to security agents on the night of Dec. 17, some 80 miles from their school, in the neighboring state of Zamfara.

The release prompted outpourings of joy and relief across Africa’s most populous nation after fears the boys would become long-term hostages of Boko Haram.

The mass abduction—the largest such kidnapping in Nigerian history—came six years after Boko Haram seized 276 schoolgirls in the town of Chibok, igniting the global #BringBackOurGirls campaign. Those hostages were in custody for three years until 103 were freed for a ransom that people involved said included the exchange, mediated by Switzerland, of five imprisoned militants and 3 million euros, equivalent today to $3.66 million.

Yet the Kankara kidnapping was resolved within a week, following a secret deal, the details of which remain a mystery.

Government officials denied paying ransom and said the kidnappers released the schoolboys because the military had surrounded them. 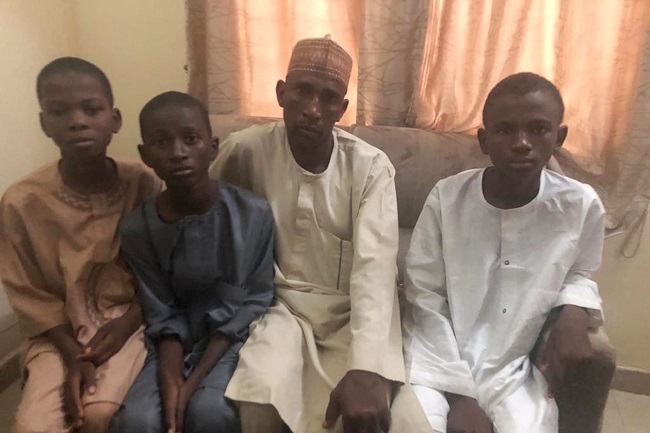 However, three boys said their kidnappers told them they were initially paid 30 million naira, equivalent to around $76,000, but decided not to release the boys because they had demanded 344 million naira—1 per head.

“They threatened to release only 30 of us when the 30 million initial ransom was paid,” said 16-year-old Yinusa Idris. “They even took 30 of us away on motorcycles ready to release,” he said.

Imran Yakubu, a 17-year-old, said the kidnappers told them: “One million naira must be paid per each student…or we will recruit or kill you.”

None of the boys said they saw money changing hands. A person familiar with the negotiations said a ransom was transferred in three batches.

A spokesman for the federal government said: “The information we have is that not a dime was paid in ransom, and we have no reason to doubt the authenticity of the information.”

A spokesman for Zamfara’s state government said it paid no ransom but couldn’t tell if ransom was paid by other persons who participated in the negotiations.

A ransom payment would signal the increasing integration of criminality and terrorism in the region. On Saturday, less than 24 hours after the Kankara boys were reunited with their parents, Katsina police said that 84 students had been kidnapped before being freed after a fierce gun duel. On Friday, in neighboring Borno state, 35 people were abducted on a highway by Boko Haram, the state government said.

The Kankara kidnapping is also raising fears about the evolution of Boko Haram, which has expanded from its base in northeast Nigeria to ally itself with bandit groups in the northwest. Nigeria’s government says Boko Haram wasn’t involved in the kidnapping and only released the fake video claims of responsibility to seek relevance.

Some analysts say the group’s leader, Abubakar Shekau, who released two audio clips and a video claiming responsibility for the boys’ kidnapping, has a lucrative new business model: using his infamy to raise the cost of ransom payments in return for a percentage cut. 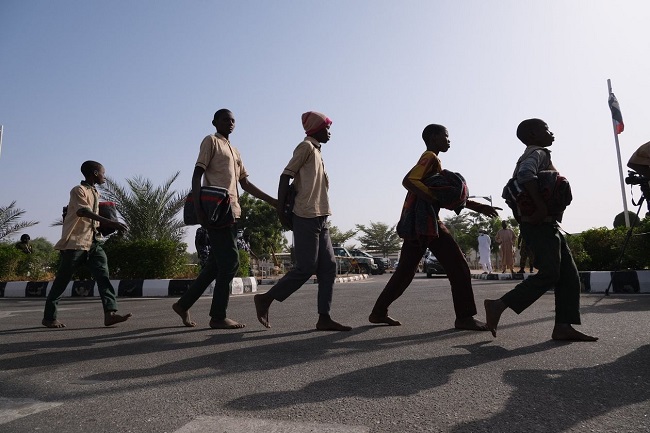 Fulan Nasrullah, a terrorism analyst who worked on the mediation to free the Chibok girls and other kidnappings, says Shekau—Africa’s most-wanted terrorist, with a $7 million U.S. bounty on his head—has found a lucrative new niche. “The kidnappers tried to ransom the boys for peanuts until Shekau got involved,” he said.

Shortly after 10 p.m. on Dec. 11, the Lawal brothers had just finished cleaning their sleeping quarters ahead of a dorm inspection the following morning when they heard gunfire. Several boys jumped from their rusting iron bed frames and the room became full of panicked chatter.

“We were all confused,” Buhari said.

“We should run,” he heard one voice say. “No, it’s vigilantes,” said another, referring to the civilian militia that often patrolled the area at night.

Then another volley of gunfire erupted, closer and louder, followed by the sound of voices barking instructions.

Anas joined the group of boys streaming out of the dormitory and toward the compound’s cement walls. There were more than 100 armed men in the school courtyard. They were shining bright flashlights and streaming into the pastel-colored buildings. “Gather here. We are soldiers,” they said. “We are soldiers.”

In the melee, Buhari and Anas lost each other.

The armed men told the hundreds of boys gathered in the unlit courtyard that they had been deployed for the school’s protection and that the students needed to follow them. Anyone who refused would be shot.

“We knew then they were not soldiers, but kidnappers,” Anas said.

The gunmen, some on foot, others on motorcycles, ordered the boys to walk in a long column, hitting anyone who walked too slowly with a whip or rifle butt.

By midnight, the hostages had entered the “Rugu” the sprawling forest that stretches over four of Nigeria’s 36 states. The brothers still had no idea if their sibling was among those kidnapped. “I couldn’t see Anas anywhere,” Buhari said. “I didn’t know if anything had happened to him.”

The boys walked until 5 a.m., hacking their way deeper into the forest, then were allowed to rest on rocks for an hour until they were ordered to move again. Almost all of them walked barefoot: They had had no time to grab their sandals.

In the daylight, the hostages got a better look at their captors. Many were also teenagers and some said they too had been kidnapped, and conscripted. 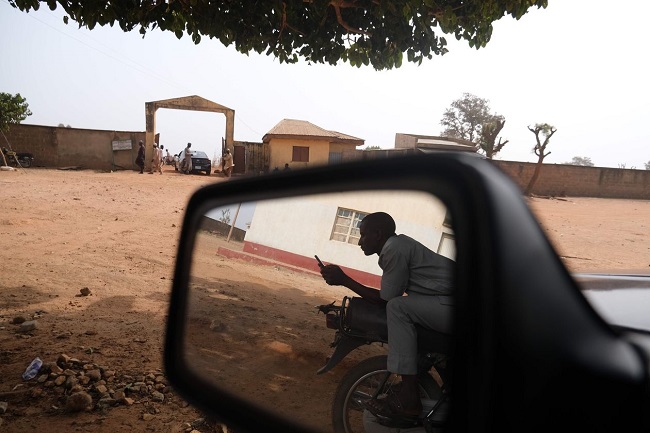 On the third day, the Lawal brothers saw each other again. “We rushed to hug and said we wouldn’t be separated again,” said Buhari.

“From then on we stuck together,” Anas said.

At one point, when the guards were looking at the sky, two students close to the back of the convoy tried to slip away. The hostages were all told to halt so they could watch their classmates be punished.

“The older one’s hands were tied to a tree and he was beaten,” Buhari said. “Water was poured on his body in the early morning so that he could feel the freezing cold.”

Some of the boys heard their captors discussing the details of the negotiations with representatives of the Zamfara state government.

On Thursday morning, a commander told them, “Tonight, you can sleep at your parents’ house.”

The kidnappers had a final message for their captives: If they went back to school, they’d kidnap them again.

Within hours, the boys were handed to security agents in a forest clearing and hoisted onto trucks bound for home. Buhari and Anas sat next to one another, relieved but saying little.

ALSO READ: Six queries on the kidnap and release of the Kankara Schoolboys

Now home in their father’s cream-colored three-room house, the brothers have agreed they won’t go back to the Kankara Government Science Secondary School.

“We don’t want a repeat of that experience,” Buhari said. “I am calling on my namesake, Nigeria’s president, to help us find another school, where we can study in peace.”

Book on life, times of Obasanjo to be launched on Monday