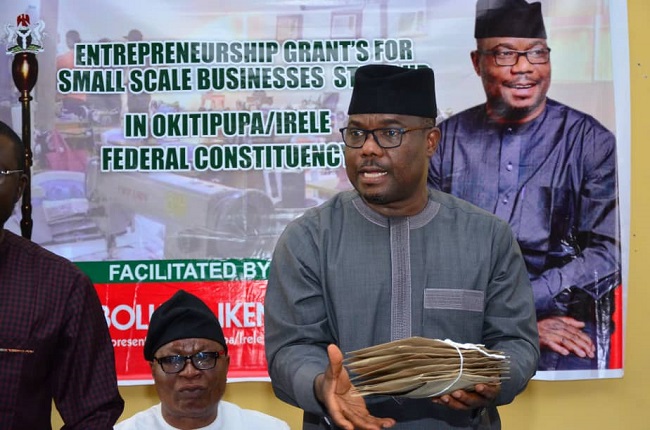 The lawmaker representing Okitipupa/Irele Federal Constituency at the National Assembly, Honourable Gboluga Dele Ikengboju has lamented the deteriorating economy of the country, expressing fear it might collapse soon even in the face of the recession.

The lawmaker however advised citizens to be more creative and innovative in creating something for them so survive the hardship economy in the country.

He added that the government must do more in its policies towards encouraging entrepreneur across all sectors of the economy.

Gboluga who was addressing his constituents during a recent empowerment programme at Ilutitun, Okitipupa council area of Ondo state noted that there was a need for the most entrepreneur to be empowered financially for them to thrive.

His Media aide, Oyeniyi Iwakun quoted the lawmaker to have said, “our economy is deteriorating every day and nobody seems to be doing anything about it. We are sitting on a gun powder in this country and if the government doesn’t act fast, the unexpected may happen.

“My advice to you is to acquire skills and begin Small Scales businesses. It will at least assist you to meet your immediate needs and as well enable you to contribute your quota to the country’s economic development.”

The statement added that not less than 400 persons benefited from the empowerment programme facilitated by the lawmaker to support constituents to begin Small Scale Businesses.

This is coming a few weeks after 200 women were empowered with N100,000 cash each by the lawmaker.

Grants ranging from N50,000 to N450,000 cash were given to individuals depending on the category of business as part of the lawmaker’s 2020 constituency project under the supervision of the “The Small And Medium Enterprises Development Agency of Nigeria (SMEDAN).

Gboluga expressed confidence that the project would have a direct impact on the people and improve the economy of the state.

While imploring them to use the resources judiciously for the purpose it is meant for, the renowned pharmacist also appealed to his constituents to be more patient and continue to support him, as he has a lot of life-transforming programme for the constituents.

Reacting on behalf of others, one of the beneficiaries from Irele LGA, Mr Olapade Adewole expressed delight at what he described as an “outstanding and impactful innovation from the lawmaker.

Olapade who got N450,000 said it would help him begin a profitable business.

Another beneficiary, Mr Olakunle Balogun from Ilutitun, Okitipupa LGA who got N400, 000 was grateful for being considered, adding that, “there couldn’t have been a better way to alleviate people’s suffering at the grassroots than such empowerment programme.”

The surprise visit made on Friday night by the leaders of the ruling All Progressives Congress (APC) to former President Goodluck Jonathan at his residence in Abuja triggered a stir in the major political camps, resulting in at least four possible theories..Our economy collapsing  Our economy collapsing