•It was the pot of beans that got burnt, not our children —Wife 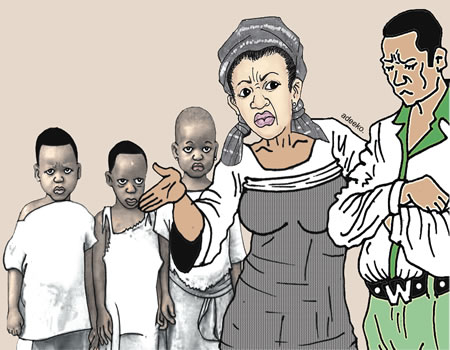 Kazeem had approached the court, pleading that it ended his marriage to his wife, giving irresponsibility, adultery and constant fight by the latter as his reasons.

Kazeem stated that Adepeju’s conduct had brought him nothing but sorrow and shame.

He explained that he decided to come to court to avoid shedding blood because Adepeju had pushed things too far.

The plaintiff prayed for the custody of their two children whom he stated he wanted to raise by himself so that they would not take after their mother.

Adepeju refused to agree to divorce but later acceded to it as hearing on the case went on.

The defendant told the court that her husband was unfair to her and that all he said was an exaggeration.

She further explained that she fought people who were always meddling into her domestic affair.

Kazeem testifying before the court said:”I’m fed up with my wife and I might likely kill her if our marriage is not dissolved today.

“Adepeju has turned me into a laughing stock in our neighbourhood because of her shameful acts.

“She is irresponsible, troublesome and promiscuous. She has therefore constantly brought me shame.

“I work in Warri while my family is based here in Ibadan. I, therefore,  travel often.

“Anytime I’m back at home, rather than rest and spend lovely moments with my family, all that I’m faced with are stories of woes.

“My wife never ceases to fight our neighbours. He fought and beat to a pulp the landlord of one the rented apartments we lived.

“She again beat and hit with a club, a  woman who was living in the house next to us and almost killed her.

“Adepeju refused to stop this embarrassing behaviour even when we moved to our own house.

“She fights our tenants over trivial issues and is always turning them against one another.

“I have warned her against this but she has refused to change, “he stated.

Kazeem went on: “Adepeju is a slot. She’s never tired of sleeping with different men. My ears are filled with her escapades.

“My wife will abandon our children in the house at night and spend the night with her lover.

“I have confronted her on many occasions on this but she had always denied it.

“She kept denying it until I decided to return home from Warri late one night and as expected she was not home while our children were sound asleep.

“I put the family’s monthly feeding allowance on our children’s bed with a note so that she would know I came home. I left very early the following day before she returned.

“She called me later in the day and started given excuses which to me were not tenable.

“My lord, Adepeju did that which I considered as the last straw that broke the camel’s back few weeks ago.

“She left our children at home as was her practice and locked the door behind her.

“Our house was engulfed with fire in the middle of the night and our children would have roasted to ashes if not for neighbours who came to their rescue.

“My lord, I’ve bore shame enough because of my wife.  WWhat I want is divorce and the custody of our two children, ‘he said.

“My lord, I don’t agree to divorce. Kazeem and I have vowed to stay together for life and that is what is going to be.

“Kazeem is unfair to me. All he said are mere exaggeration, his plan is to get rid of me.

“It is true that I fight with people, but these are those who will never let me be.

“Our neighbours and tenants are always planting discord in our home. They paint negative pictures about me before my husband and turn our home upside down.

“My husband no longer holds any trust in me because he believes I am promiscuous.

“I beat and hit the old woman my husband made mention of with a club because she didn’t wish me well.

“She is a witch. She wanted to get me initiated in her group but I refused.  She vowed to deal with me and she made real her threat.

“She took to attacking and afflicting me in my dreams and I would fall sick for days.

“My lord, if what Kazeem wants is divorce then let it be. He lied that I left our children all alone in our   apartment in the night when the fire incident occurred.

“I left them in the care of two of my siblings who were around.

“Again, he lied that the house was engulfed with fire. It was the beans in the pot that got burnt not the house,” she explained.

Giving his judgment, the court president, Chief Ademola Odunade dissolved their union and granted custody of their two children to the defendant.

The plaintiff was asked to be responsible for their general welfare and give their education and health care priority.

He was ordered to give the defendant N10, 000 every month as their children’s feeding allowance.