Other regions should concede presidency to Igbo in 2023 —Ebonyi APC chairman, Okoro-Emegha 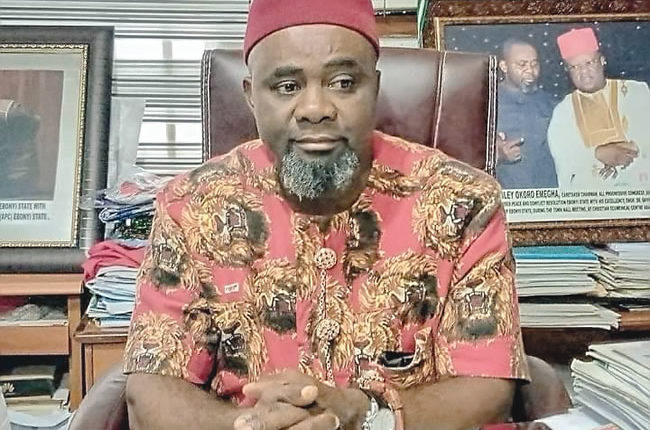 The chairman of the All Progressives Congress (APC) in Ebonyi State, Chief Stanley Okoro-Emegha, in this interview by EGBO GRACE, speaks, among other things, on the need for Nigerian to allow an Igbo man to become the president in 2023.

Are you satisfied with the state of the party at the state and national levels?

I must first commend the national leadership of our party and the leader of our party, President Muhammadu Buhari; the governors representing our party in the various states. I commend the cordial working relationship between them and the national leadership of our party. I also want to commend them for the good works they have been doing in their respective states. I commend the chairmen of our party in all the states and their leadership. The recent congress is one of the best congresses that have ever happened. They came like a family thing. You know that in our constitution, it is the right thing to do. It is the best way of making sure that we give space for everybody in our party. This is a congress everybody participated in and it ended very peacefully and such had never happened before. Everybody is satisfied. We are all very fine about it because there were not much disagreements, complaints, although there are still small areas where we are doing everything to make sure that things are resolved.

You said there are areas that have problems. Is Ebonyi one of the states having party crisis?

Are you worried about people’s perception of the APC?

In some states, the party is doing everything to resolve one or two minor issues. The national leadership of our party has constituted a reconciliation committee to handle such affairs. They are doing everything to bring everybody to the table for discussion. It is also enshrined in our guideline that we can disagree and agree at a certain point but then at some point, everybody will have to sheathe their sword. So, the national leadership of our party is doing everything humanly possible to make sure that conflicts are amicably resolved. So, I am not worried about the outcome of the congress in the state because there is no problem. The appeal panels on congresses at the ward, local government and state levels have been doing the needful and there is no petition and that has proven that there is no issue at all regarding our congresses.

Would you say the APC has done well in the area of economy and security in the country?

I must say that Rome was not built in a day. A government held power for years in this country and we were where we were before the APC government came on board. We are about to complete eight years and we have carried the wine and water and everybody can attest to the fact that there is a difference between the old Nigeria and today’s Nigeria. We are building the country for future generations. Certain projects that are being embarked on now in Ebonyi and other states are projects that can last more than 50 years. A government that was close to the South-East did not build our second Niger Bridge. The man we could beat our chests and say he is our own couldn’t do it in so many years. Now the APC government has come and they have taken up the project and we are all witnesses and these are things some of us thought would not happen in our generation. You can see that what we used to have in the country is no longer the same. Nobody is complaining any longer that there is no light but high tariff. The government is also coming with a lot of road projects. Here, in this state, no one can say that they have not seen transformation in all ramifications from the government of [Dave] Umahi. There is no person with conscience that would say they are not seeing the transformation. He has gone beyond his campaign promises and, very honestly, he is still eager to do more. Governor Umahi is determined to take Ebonyi to a level that will be hard to match for any other state.

Everybody knows that security can’t be left for the government alone to handle; everyone has a role to play. Everybody has to make contributions in the area of information because security agents are humans. Although they are trained professionals, they are not spirit and so they can’t be here and be there at the same time. How many Nigerians are willing to offer information? You will see a family that knows that their child is a bandit, a criminal, yet they will not speak up. But how many Nigerians are willing to offer such information to the security agencies to do their work without compromise?

There are security challenges in the country. That is not disputable. But the authorities have managed the problems to the point where we are now. The challenges are being drastically reduced. What is happening in other states cannot happen in Ebonyi State because the governor started early enough. No transformation can take place in a state without security and that made the governor tackle security first. When he came on board, he applied the biblical quote that God said ‘let there be light and there was light’. There is no hoodlum or armed robber that can operate in the light except darkness. He chased darkness away and secured the environment. He also brought operational framework into it the security architecture, making sure that all the things the security agencies needed to perform their professional duties were provided. This brought about a robust relationship between the government and the security agencies. With the understanding and synergy existing among the army, police, civil defence and road safety, they are now comfortable to put in their best and that has caused criminals to be scared of Ebonyi State. You cannot commit a crime in the state and get away with it. We have not reached the desired level but we are on track.

As a security consultant to Ebonyi State government, how do you think insecurity can be tackled in Nigeria?

Honestly, it is simple. The blueprint is there, like what we are doing now with our security outfit called Ebubeagu. By creating that security outfit, the government is engaging youths because we have recruited more than 2,000 youths and that has reduced unemployment. Ordinarily, these are people that would have been loitering in the street. Secondly, you have given them a charge that means they will see themselves as a failure if there is a crime in their areas, and they are determined to battle crime. They will also complement the efforts of the security agencies, especially on the intelligence gathering, because they are more rooted in the nooks and crannies of the communities and 80 per cent  are committed in the villages and there is a law backing them to arrest and hand over to the police those found wanting for possible prosecution. So, I charge the Federal Government to replicate that. What is important is the target; what the outfit is meant for. So far, there is salary for them. Very many of them are now taking care of their homes because Ebonyi State pays them between N50,000 and N60,000 monthly and a good manager will be able to feed his family with the allowances the government gives to them. So, I believe that if what is happening here can be replicated in other states, there will be drastic reduction in crime rate because crime cannot be eradicated. So, I maintain that security should not be left for the government alone to handle.

What is your opinion about direct and indirect primaries, as provided for in the Electoral Amendment Bill recently passed by the National Assembly?

Even if they say you should stay in your house and vote, there is no time the APC in Ebonyi State will partake in an election without winning 100 per cent because Ebonyians are wiser now. In Ebonyi, the era of sharing rice and running to Abuja has gone. There is no pattern used that we will not win our elections in Ebonyi State, which is very peaceful.

What is your stake on the zoning of the presidency?

All we are saying is: let an Igbo man be the president of this country. We know that it is one man one vote but we are appealing to other regions to, for once, see us as a people that belong in Nigeria.

How united is the South-East, especially the governors?

The governors have a cordial relationship beyond party because they know that they are from a particular region and as such, they cannot afford to be disunited. They are united and planning on moving our party forward.

Is Anambra State election not a pointer to the fate that awaits APC in 2023?

The Anambra election has only shown Nigerians how fair President Muhammadu Buhari can be. We are not saying that we are happy that our party lost and somebody has been declared winner and our governor has congratulated him because he is our brother also despite party difference. We all care about the uplift of the South-East region. The election will not discourage us at all. We had only one state before but now we have two and we are approaching the season to take over the remaining states because the APC government is giving development to the entire nation.

Sore throat relief: What’s the best medicine to use for children?