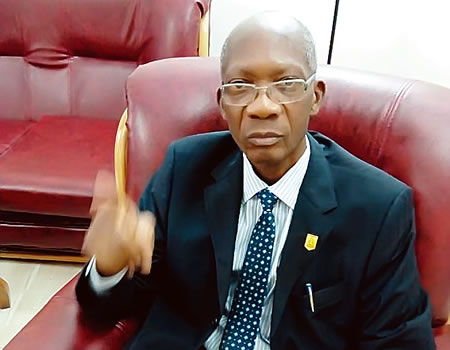 THE Osun State Resident Electoral Commissioner, Mr Olusegun Agbaje, has said that if vote buying is not killed in today’s governorship election, the country is in serious trouble in 2019.

He said this on Friday at a press conference held at the office of the Independent National Electoral Commission (INEC) in Osogbo.

Agbaje asked voters in the state to be patient enough to devote at least two minutes of their time without phones for the election.

He wondered why Nigerians would switch off their phones for six to 10 hours while travelling abroad and would not accuse the flight crew of infringing on their fundamental human rights but would make the same accusation against INEC for two minutes of voting.

Agbaje said the commission did not give out uncollected permanent voters card (PVC) to politicians as claimed by some people.

“The commission has put in place adequate preparation for the Osun State governorship election on Saturday [today],” he said.

“As we speak, I can confidently say that the commission is ready to make the election a model that will be applauded by Nigerians and the international community. Some of the things we have done include intensive voters education and public enlightenment campaign; stakeholders meeting and we have distributed non-sensitive materials to the 30 local government areas.

“We have recruited 16,000 ad hoc staff from serving members of the National Youth Service Corps (NYSC), students of the Federal Polytechnic, Ede and Obafemi Awolowo University, Ile-Ife and staff of federal establishments in Osun State.

“We have put in place adequate security arrangement for the peaceful conduct of the election. There will be three security agents at each polling unit on Election Day as approved by the commission to maintain law and order. Through a painstaking process that involved data consolidation, automated fingerprint identification system, business rules for PVC, CVR and transfers resulting in the registration 807,598 (48 per cent) male and 874,897 (52 per cent) female making a total of 1,682,495 registered voters in Osun State.

“Then, we have issued 1,246,915 permanent voters cards (PVCs) representing (74.14 per cent) to registered voters at the end of the PVC collection period on September 19, leaving a total of 435,015 PVCs, that is (25.86 per cent) yet to be collected by their owners and are being kept in the INEC strongroom at the state office here in Osogbo.

“All of us have been talking and complaining about vote buying and the commission has put a strategy in place. We have a duty to protect the integrity of our elections. Bringing phones and other photographic devises is okay. INEC has benefited with what we have seen on social media during elections. But once you collect our ballot paper, you are now in our custody.

“Nigerians should be patient enough to give INEC two minutes of their time, without snapping pictures. When you board a plane, they tell people to switch off their phones and for about six to ten hours if you are going to London or America, people don’t see it as fundamental human rights abuse. But for two minutes that Nigerians will give to INEC, people are saying we are infringing on their fundamental human rights.

“If we don’t kill vote buying here in Osun tomorrow, we are in serious trouble in 2019.”