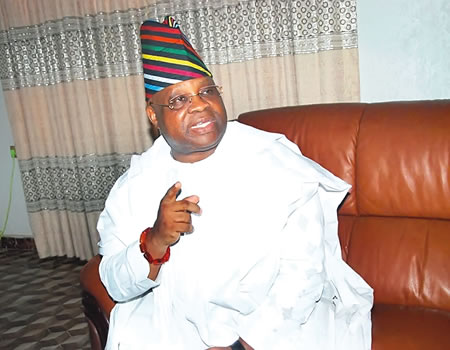 THE campaign organisation of the governorship candidate of the Peoples Democratic Party (PDP) in Osun State, Senator Ademola Adeleke, has alleged the creation of illegal polling units in several parts of the state by the Independent National Electoral Commission (INEC), in connivance with the All Progressives Congress (APC).

The units, according to the campaign organisation, are known only to the APC and largely concealed from the opposition parties.

A statement by the Director General of the campaign organisation, Chief Lere Oyewumi, which contains the accusation, reads, “We have discovered several of such illegal, rigging-focussed voting units at Ila Orangun, Ilesa, Iwo and Osogboland. The said centres with between 6,000 and 10,000 voters’ register have been supplied with all necessary voting materials and equipment. The goal is to ensure that fake votes from such centres are added to the mainstream votes to give an edge to the APC.

ALSO READ: Oyo 2019: I have no anointed candidate ― Ajimobi

“We gathered too that the technical rigging through fake centres originated from INEC national headquarters with the state office compelled to play along. We note with anger that the practice is widespread and has already undermined the integrity of the electoral process even before it takes off.

“We consequently demand that the electoral commission discontinue the planned operations of the fake centres .We seek, with all sense of urgency, the intervention of critical stakeholders before it is too late. We warn that we will insist that only polling units contained in the list submitted by INEC to the political parties will be acceptable to us, both for the purpose of voting and collation.

“Our party agents and returning officers are hereby directed to remain extra-vigilant and insist only on the recognition of official list of polling centres. Our party and candidate will not accept rigged votes from illegal units.”

“The international and local observers are hereby notified of this perfected rigging plot. All democratic forces at home and abroad are alerted of this impending rape of democracy. All lovers of this nascent democracy are informed of a concluded plot to thwart the will of the people.

“We equally call the attention of the Presidency and remnants of democratic forces within the ruling party to this grave rape of the electoral process. We will not accept illegality designed by political forces already desperately rejected by the people.

“INEC at state and national levels can still redeem itself. Osun people will not smile at agents of slave holders who are intent on further imprisonment and torturing of our people.”