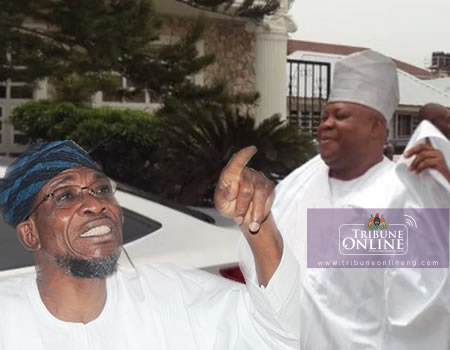 Electioneering campaign for this Saturday’s by election for Osun West Senatorial assumed a dramatic trend on Wednesday, when Osun State Governor Rauf Aregbesola took on Adeleke’s family in Ede, saying the death of Senator Isiaka Adeleke has affected the mentality of his junior brother, Dr Deji Aeleke.

Aregbesola, who spoke in Ede, the country home of the Adelekes during a mega rally organised by the All Progressive Congress (APC) to drum support for its candidate in the July 8 bye-election for Osun West Senatorial District, said senatorial seat is not the exclusive right of any family.

Speaking in Yoruba language to a crowd of supporters that thronged the campaign ground, Aregbesola, who was visibly angry stated: “It is Deji Adeleke that has gotten favours from me. Many years after he built his university, Adeleke University in Ede, he could not obtain Certificate of Occupancy (C of O) from previous government.”

According to him, “Deji Adeleke does not have the financial capacity to bail out Osun out of ‎its financial challenges even before now, not to talk about lending us money to pay workers’ salaries. If anything at all, it is their family that sought and got favours from the Osun State Government under my watch.”

“It is to the glory of God that they got the Certificate of Occupancy of their university from our government. Why didn’t those who are their new friends give them C of O of that university? If Deji Adeleke has so much money, why is he begging me to waive the payable tax of his university? Why can’t he just pay?

“I am bold enough to say this over and over again, because I have never sought for assistance from any of the Adeleke’s family even during the life time of Senator Isiaka Adeleke, nothing as such occurred. Though my relationship with late Adeleke was cordial and beyond politics because we have known each other even before Osun politics because our residences are adjacent to each other in Lagos State.

“He was a good brother and a friend to me while alive, but during this dire economic period, I never approached him for any financial assistance not to talk of obtaining cash from his brother, Aregebsola asserted.

Late M.K.O Abiola died for democracy and in that light, his son, Kola Abiola, should be made the president of Nigeria. Things don’t work that way.”

Meanwhile, the Peoples Democratic Party (PDP) and the All Progressive Congress(APC), in Osun, have expressed divergent positions over the weekend’s alleged hoodlums attack on the campaign train of the former’s flag bearer in the July 8 bye-election for Osun West Senatorial District, Dr Ademola Adeleke.

While the PDP in a statement signed by its state chairman, Soji Adagunodo affirmed that armed thugs and miscreants suspected to be members of the Osun APC allegedly attacked the campaign train of the Adeleke at Gbongan and Odeomu in Ayedaade Local Government Area of Osun state, the APC described such accusation as unfounded and laughable.

The PDP contended that trouble started when Adeleke got to Gbongan as part of his visitation to the party members when thugs in large numbers attacked the campaign train.

According to the statement, “The thugs who came with various dangerous weapons damaged vehicles and injured people. But luck ran out on them as the people of the town came out in large numbers to resist the violent attack.”

It would be recalled that Adagunodo had raised alarm that members of the APC in Osun State were planning to unleash terror on the campaign train of the PDP candidate for the forthcoming Osun West bye-election slated for July 8, saying that APC allegedly imported thugs into the state ahead of the election.

Reacting to the accusation of the PDP, the Director, Publicity, Research and Strategy of APC in Osun in an email message to Tribune Online on Monday said “the PDP is desperately looking for attention, albeit negative.”

He stated, “The good people of Osun State know full well a violence-prone political party. Since we berthed in the state in 2005, we knew what we suffered in the hands of these brigands; until Aregbesola’s administration came in 2010 and put a stop to the wanton destruction of lives and property.

“They will commit crime and blame another for it. PDP remains the same old merchant of violence and bloodletting and nothing new will emerge from this People’s Destruction Party,” Oyatomi asserted.

Time for restructuring is now ―Afenifere

Osun people’s love for Adeleke not over yet ― Atiku

#FactCheck: Has INEC issued Certificate of Return to Ademola Adeleke as Osun…