Famurewa, ex-lawmaker who was a member of House Committee on Universal Basic Education said his agency will leave no stone unturned in ensuring quality education being a cardinal program of Oyetola-led administration.

He said this while resuming alongside other members of the board on Monday in Osogbo, the state capital.

Famurewa and other members of the board were received with ecstasy and encomium of love by the entire staff of the agency led by the SUBEB Secretary, Mr. Adeoye Bakare who on behalf of the members of staff pledged their unflinching support and loyalty while welcoming them to the office.

While speaking, he said “having realized education is a cardinal program of this government; it’s our resolve as an agency to stay committed to the new policy regime with a view to reshaping and rejigging the education sector for our upcoming generation.

“To all the entire staff of this agency, ours is not to checkmate or witch hunt any policy of the past but to consolidate and reinforce it in our own best way for the purpose of lifting the glory of education in the state”, Famurewa said.

Earlier, the state government of Osun has set up a panel to review the existing education policy following the clamour for policy review by stakeholders. The panel has in its reports, recommended the reversal of the single school uniform, ‘reclassification’ of the public school system and the abolition of single-sex schools in the state.

However, Famurewa on behalf of the other members of the board expressed their gratitude to Governor Adegboyega Oyetola for deeming them fit for the appointment and he emphasised the agency will make him proud in their assignment. 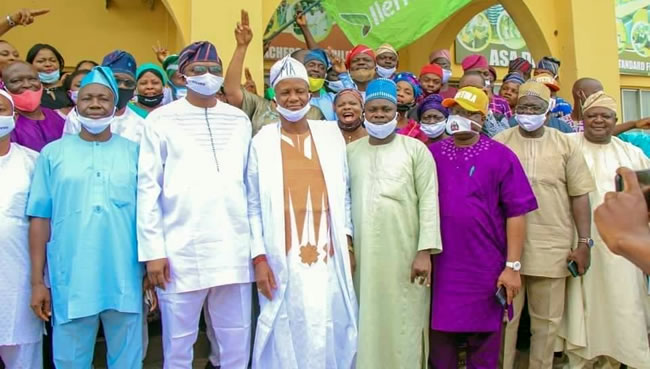 While paying homage to the state chairman of the party, Prince Adegboyega Famodun, Famurewa appreciated the effort of the chairman for considering them worthy to serve in the agency and declared unwavering loyalty and allegiance to the leadership of the party.

Giving his remark, the APC Chairman congratulated the new SUBEB boss and other members on their appointments and at same time, urged them to embrace diligence, commitment, transparency and selflessness in their assignment.

Speaking at the event, the Director General of Bureau of Social Services (BOSS) in the state, Mr. Richard Tinubu lauded Governor Oyetola for the appointments describing it as a round peg in the round hole.

He equally, appreciated the party chairman for his focused leadership and commitment to growth of the education sector.

In his submission, Honourable Olatunbosun Oyintiloye appreciated the kind gesture of the party chairman for the active role and support he gave concerning the appointment. He then, prayed for Governor Adegboyega Oyetola and the party chairman that God Almighty continue to guide them in the steering of the government and the party respectively.

Other dignitaries in the entourage include Hon. Femi Kujenbola, Hon. Busuyi Mokanjuola, Hon. Bunmi Obesun, Hon. Niyi Oladipo and Hon. Joke Olatunde who are all chairmen and chairpersons of different local governments in the state.