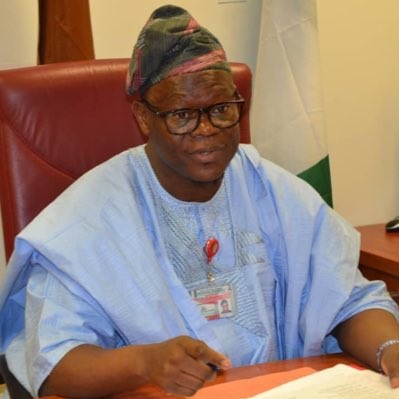 Share
Legal Practitioners have reacted to the abusive reaction of Senator Basir Ajibola, Representing Osun Central Senatorial District, of Osun State, to the position of the Member representing Obokun/ Oriade Federal Constituency of Osun, Hon Busayo Wole Oke  on the parliamentary system being practised in the State, describing it as baseless
Hon Oke, a member of the Peoples Democratic Party (PDP), had at the weekend faulted the subsisting parliamentary system of government being practiced in the administration of the local governments across the state and called for an adjustment in line with the provisions of the 1999 Constitution as Amended.
Reacting to the development, Senator Ajibola, a member of the All Progressives Congress (APC), who is the Chairman, Senate Committee on Media and Public Affairs, said that the statement of  Hon. Oke depicted ignorance of the subject matter.
He claimed that the motive of the lawmaker in raising this issue now was suspect because the local government law had been operational more than two years ago, adding that one wonders how he suddenly woke up to dream of unconstionality.
However, in different statements made available to newsmen in Abuja by two Legal Practitioners,  Kanmi Ajibola Esq, former Nigeria Bar Association (NBA) Chairman,  Ilesha Branch and an Ibadan based legal luminary, Barrister Yemi Giwa condemned what they described as an uncivil language used by Senator Ajibola against Oke.
While defending Hon Oke, Kanmi Ajibola said that the parliamentary system in the administration of local government in Osun State was a constitutional aberration and oddity which must be addressed immediately in the interest of the People of the state.
According to him,  “during the tenure of office of Ogbeni Rauf Aregbesola as the governor of Osun State, among others, two ignominious onslaughts were uncorked against the constitution of the Federal Republic of Nigeria on the advice of the then Attorney General and Commissioner for Justice, now a senator of the Federal Republic of Nigeria, Senator Ajibola Bashiru. For the reasons best known to him, he has made Osun state a subject of constitutional controversy to date.

The lawyer said that the position of Hon Oke was on the legality or otherwise of the parliamentary system in the administration of Local Government in Osun state, adding that Hon. Oke, a federal lawmaker in the National Assembly from Osun state expressed his views on the parliamentary system of government in the Local Government administration in Osun state and described it as illegal and unconstitutional.
Kanmi Ajibola said the question that should be asked is, whether the parliamentary system being employed in the administration of Local Governments in Osun state is legal and constitutional.
According to him, “by the provision of Section 2 (2) of the 1999 constitution (as amended), it provides that: ‘Nigeria shall be Federation consisting of States and a Federal Capital Territory.’
“Section 3 (1) contains all the names of the thirty-six states that make up the Federal Republic of Nigeria.
“Section 3 (2) directs us to the first column of part 1 of the first schedule where all the names of the Local Government Areas that make up each state are listed.
“The import and linkage of this is that, without Local Government Areas there cannot be a state and where there are no states there cannot be the Federal Republic of Nigeria.
On his part, Barrister Giwa described Senator Basiru’s criticism of Honourable Oke’s condemnation of operations of Parliamentary System of Government at the Local Government Levels of Government as amusing, “It is amusingly displeasing and odious.”
Barr. Giwa who is an indigene of Osun said “it is displeasing to read the opposing views of two Federal lawmakers from Osun State, over the (un)constitutionality of the parliamentary system adopted by Osun State at its local government level.
“It’s not the topic that is disturbing but the way and manner the two high ranking politicians are vituperating over the issue. It is nauseating and to say the least unparliamentarian.
“Honourable Oluwole Oke,representing Obokun/Oriade Federal Constituency at the House of Representatives, Osun State and Distinguished Senator Ajibola Basiru representing Osun Central Senatorial Constituency comments on the matter are trending in the social media. It is unwarranted brickbats”
Mr Giwa who lamented the misinterpretation of the potency of the law on operations of Parliamentary and Presidential system of Government added that such a system of government is alien to Nigeria construction.
“As long as our system of government remains presidential such system cannot fly because it is alien and an affront to the constitution of the Federal Republic of Nigeria, 1999(as amended).”
He condemned the use of the language of Senator Ajibola as “raw and uncourteous,” adding, “I am a bit disappointed in the Senator. I am by God’s grace a lawyer who has had about two decades of consolidated fruitful practice. I cannot situate Bashiru’s postulation anywhere in our mother law– constitution.
“I sufficiently know the intellectual and oratorical prowess of the two legislators, but I can conviniently say that the Distinguished Senator has prevaricated and turned the law upside down.
“What Osun State is practising at the local level dubbed parliamentary system is execrable and despicable in civilized clime”, Giwa said.
He, however, opined that “the whole exercise will soon crumble like the way the ‘state of Osun’ crumbled and the obnoxious educational policies died in the state.”
Meanwhile, the Osun State House of Assembly has commenced the amendment of the State Local Government Administration Act 2015.
As the time of filing the report, it was not known whether the lawmakers would amend the lacuna by removing the State of Osun and switch to Presidential System in compliance with the Constitution.