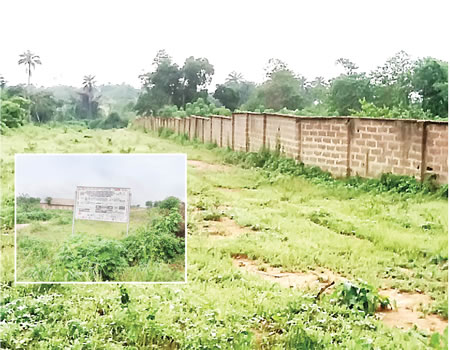 For many years, the completion of the MKO Abiola International Airport was a major expectation that the people of Osun State looked forward to. The host, the Ido Osun community, had imagined the significant gains that would accrue to them after the take-off of the use of the facility. After expending so much money, the public was shocked when the Osun State governor, Rauf Aregbesola, announced the failure of the project. OLUWOLE IGE reports the many sides to a promising project gone awry.

Ido-Osun, a sleepy and rustic community at Egbedore Local Government Area of Osun State, is historical and somehow distinct among the ancient towns in the state.

The saddening traits of excruciating poverty, deprivation and frustration, typical of a rural settlement in any part of the country are largely visible among its inhabitants. Notwithstanding its socioeconomic inhibitions, natives and residents of this interesting community are not deterred as they struggle to make their living through subsistent farming, trading and other forms of economic activities to put food on the table.

Inadvertently, the community began its journey into limelight when soldiers of the British Empire and Nigeria Army constructed an airstrip within the community’s domain, where war veterans, who fought World War II, were airlifted with cargo planes to the battlefronts.

Decades after this historical feat of Ido-Osun, former governor of Osun State, Prince Olagunsoye Oyinlola attempted to construct a modern airport at the same expanse of land, where the outgoing governor Rauf Aregbesola had attempted the completion of the construction of the MKO Abiola International Airport. Findings by the Nigerian Tribune indicate that the site of the airport was acquired in 1933 by the government and compensation was paid to the then owners of the land.

Unexpectedly, Aregbesola, who is admired by many for his zeal and passion for Osun’s aesthetic growth, in the early hours of two Saturdays ago, jolted his audience during an interactive programme tagged “Ogbeni Till Break” when he said that the MKO Abiola International Airport which went into a concession agreement to a private firm, AWOL International Limited for N69 billion, had failed. Though, his declaration was blunt, the governor only chose to tell the truth, with the conviction of letting the people of the state know the stark reality about the project.

But the development deflated the rising hope of not only the natives of Ido-Osun, but also the majority of Osun people, who had hitherto anticipated the potential of such a promising project as a catalyst to positively drive the socioeconomic and tourism sub-sector in the state.

Interestingly, the airport, which was initially awarded for the sum of N4.5 billion was upwardly reviewed by the state government, before its concession to AWOL International Limited on October 26, 2017, at the sum of N69 billion. From the terms of the Memorandum of Understanding (MoU) signed between the administration of Aregbesola and the management of the private consultancy firm, the latter was expected to build, operate and transfer the airport to the former after 30 years.

The signing of the concession agreement which is to harness the infrastructural development of the state was held at the state secretariat, Abere. AWOL International Limited in partnership with a Turkish company, Biray Group, was expected to complete the project within eight months. The source of funding the airport project then was the EXIM Bank of Turkey.

During the signing of the concession agreement, the Chief Executive Officer, AWOL International Limited, Mr Nurudeen Ogunlade, said the agreement was of great significance to all the parties involved, stressing that when completed the airport facility would open the doors of trade and investments among neighbouring states in the South-West, just as it would complement the state’s economic value.

While highlighting the features of the airport, Ogunlade contended that apart from the first phase expected to be completed before the last quarter of 2018, other amenities that would impact the location, Ido-Osun and the geographical area of an airport would be facilitated within two years.

“On the completion of the construction of the first phase of the airport within the period of eight months, it would take off with five aircraft, three passenger helicopters and one cargo by AWOL International Company. To complete the entire establishment of the airport with five-star hotels including all amenities like a cultural centre, water park recreation centre and garden, butterfly museum and casinos, it will take the period of two years.

“With this design, the airport will facilitate the smooth movement of people and goods from one point to another and serve as a channel way for tourism, hangar and cargo”, Ogunlade said, adding that the concession agreement was not in any way detrimental to the economy of the state.

Responding, Aregbesola said the government had planned to embark on the project and deliver at the appropriate time but was hindered by the financial situation of the country.

The governor emphasised that “We are doing something that is really extraordinary to make this state a light bearer of Nigeria. When I began the entire project: the airport, roads, the schools and other social infrastructure, I was so sure that if there is no problem with the stream of income, definitely all these projects will be completed. The arrangements we put on ground are to ensure effective completion of those projects, after all we did not use the conventional method of financing our projects, rather we brought to bear what we called ‘flexible funding’ which we pay the contractor at when due through the bank.

“However, it was the change of the income scheme that constrained us financially which made it impossible for us to continue with the project. But before the fund initiation from our scarce income, we had expended on the project the sum of over N2.5 billion. The contractor handling the project had done a certified work amounting to N3, 667,178,112.15 meaning that the outstanding for the contractor against the state is the sum of N640, 970,164.10 and these amounts included retention of N170, 609, 64.16.”

According to the agreement, the concessionaire was expected to take 100 per cent financing of the project. The signing agreement was witnessed by the Chief of Staff to the Governor, Alhaji Gboyega Oyetola; Head of Service, Dr Oyegbade Olowogboyega; Attorney General and Commissioner for Justice, Dr Ajibola Basiru and the Economic Adviser to the Governor, Dr Teju Fagbeja, among others.

Giving further details of the state of the airport before appending his signature, the governor maintained that the project at inception was financed through “flexible funding” with an appreciable level of the payment to the tune of N3.6 billion, saying like other infrastructural projects, the airport financing method was effectively fashioned out to ensure its completion just as he expressed appreciation to the Turkish firm for having confidence in the multi-various features of the airport after completion.

Defending the project before the Osun State House of Assembly last year, the director of Public Building at the Osun State Ministry of Works, Mr Niyi Ogundiran, explained that the concession arrangement would last for 30 years before permanent transfer of ownership to the state government.

Ogundiran, who said the state government had spent N3.6 billion on the project before the concession arrangement, however clarified that the N3.6 billion would be deducted from the N69 billion contract sum.

When the Nigerian Tribune visited the airport, the site had been overgrown with weed, most especially the runway, while some parts of the perimeter fence had collapsed. Herdsmen were also seen grazing on the site. The control tower and few other facilities, constructed about three years ago, could not be accessed due to thick bushes, gradually assuming the status of a forest.

Speaking on the development, the media adviser to Aregbesola, Mr Sola Fasure, said that “the project is still intact” and that the concessionaire had not been able to fulfil his conditions on the contents of the MoU regarding the concession. “The concessionaire failed. He failed to deliver on his side of the bargain. He was supposed to build the airport and hand it over to the state government. The concessionaire was not able to access funds for the project,” he said.

Speaking on the airport in his community, the Alayemore of Ido-Osun, Oba Aderemi Adedapo, lauded the vision of Aregbesola in the conceptualisation of the project, pleading that the state government should not abandon the project despite the challenges.

According to him, “we want to use this opportunity to appeal one more time because I know the governor really meant to do it. I don’t know the structural dysfunction that happened along the line, because he campaigned with this thing when he got to my palace some years ago. As a matter of fact, nothing is impossible though I don’t know the details of the failure of the concessional arrangement.”

Some residents of the community who spoke to Nigerian Tribune also implored the state government to ensure the completion of the airport, just as they implored Aregbesola not to forget Ido-Osun as regards other amenities.

One of them, Mr Saka Aboderin, pleaded that “we just want to beg the government to assist us on this airport project because it would greatly help boost the local economy of Ido-Osun.”

Reacting to the issue, an industrialist and elderly citizen of Osun State, Senator Olu Alabi said “a lot of people have been involved in the construction of that airport project. There was a time some money was approved for the project in Abuja and I don’t know what happened after that. Aregbesola’s involvement was the icing on the cake, who now took over the construction of the airport. The contract for the airport was awarded by his government before it was concessioned. I travel to Abuja often and I go by road, but now everybody flies. But, we have to go Ibadan airport each time we want to go to Abuja by flight. There was a time I had to travel to Ilorin before I could board a commercial flight to Abuja and you could imagine the loss of time. But, if that airport in Ido-Osun had been there, there would not have been need for me traveling to Ilorin.

“However, if these two airports in Ibadan and Ilorin are still functioning, I don’t know any wise investor that would risk his funds on another airport in Osun. Each time one drives past the MKO Abiola Airport, the only thing you see there is the fence, without any other facilities to show for the money expended so far.

“There should be proper insight  into what happened. Is it the government that defaulted in the concession agreement or the concessionaire? These are the issues that the public need to know about”.

When contacted, Dr Stephen Dauda of the Department of Economics and Business Studies, Redeemer’s University, Ede, stated that “the airport project is not necessary in the first instance because Osun State is not far from Ibadan, where we have an airport. It is not even up to an hour drive. I would have thought that if there is any money that would be spent within that economy to either generate employment or boost productivity,  such fund should be invested to generate money or enhance other sectors of the local economy in the state.”