Osun gov election: The major candidates and their footings

Politics
By Adetoyese Shittu-Alamu On Sep 15, 2018 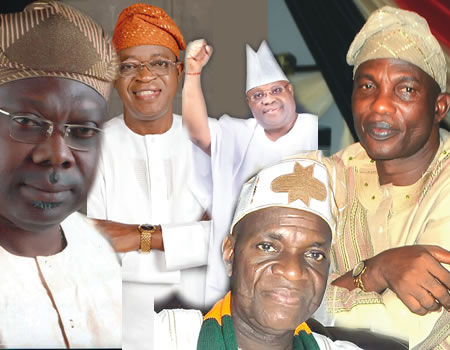 IN the geographical entity which its current administrators love to call the State of Osun, the electorate will go to the polls next Saturday to choose their next governor.

The over four million Nigerians who live in the state have looked forward to the coming of September 22 ever since the Independent National Electoral Commission (INEC) declared the date for the governorship election almost a year ago. Since the beginning of the year, so much has happened politically in the state to focus attention on next Saturday.

All is set for the battle for the soul of the state by 48 political gladiators. Unlike the last governorship election which was held on August 9, 2014 and which gave Rauf Aregbesola the opportunity to administer the state for a second term, there is no ‘incumbency factor’ in this year’s election. All the candidates are seeking to govern the state for the first time. This is in spite of the positions they have held before in the past. Four years ago, there were very few political candidates. That narrowed down the contest to a straight fight between the All Progressives Congress (APC) and the Peoples Democratic Party (PDP), even though there were the Labour Party, Social Democratic Party, Accord Party and a few other political parties in that election.

There are so many candidates for this election but five of them can be said to be major contestants. Each of the five is strongly footed in the political parties they represent. Each of the state’s three senatorial districts (East, Central and West) has 10 local government areas. It is on these 30 local government areas that the focus will be in the great battle for the political soul of the 27-year-old state which climaxes next Saturday. In spite of the noise by the many parties, the outcome of next weekend’s election would be decided by only five of them. These five parties are the ruling APC, the PDP as the main opposition and the Action Democratic Party (ADP), SDP and African Democratic Congress (ADC).

The ADP is a breakaway group from the APC, in the aftermath of the party’s primaries held on July 20. Its governorship candidate is Alhaji Moshood Adeoti who, until the primaries, was the Secretary to the Osun State Government. His running mate, Adeolu Durotoye, a professor of Political Science from Afe Babalola University, Ado-Ekiti, was a governorship aspirant on the platform of the PDP until late July.

The ADC has Alhaji Fatai Akinbade as its candidate. Also on that ticket is retired Justice Olamide Folahan Oloyede, “the enfant terrible,” who spoke her mind the other day and so rocked the boat, even while she was a sitting judge. Fatai Akinbade contested the PDP primaries, after which loss his former boss, Prince Olagunsoye Oyinlola, invited him to a “greener pasture.” The ADC gave Akinbade a waiver by dropping for him Ademola Kazeem, its initial candidate.

The APC has Adegboyega Isiaka Oyetola as its candidate. He was the Chief of Staff to Governor Aregbesola. A co-aspirant in the party’s primaries, Benedict Olugboyega Alabi, has been named as his running mate.

The forth major candidate to reckon with is PDP’s Nurudeen Ademola Adeleke. He is a serving senator and younger brother of the late first civilian governor of the state, Isiaka Adeleke, who died in April 2017. A serving member of the House of Representatives, Albert Adeogun, is the party’s deputy governorship candidate.

The fifth major candidate is Chief Iyiola Omisore, a former deputy governor of the state and a two-term senator. He represented Osun East in the Senate between 2003 and 2011. His running mate on the ticket of the Social SDP is Azeez Olayemi Lawal

Among the five governorship candidates, Oyetola of the APC is the only one with less than 10 years experience in politics. Until the coming of Aregbesola in 2010, Oyetola remained an insurance boardroom man who was not known to public office. Since January 2011, he had been the Chief of Staff to the governor. Workers in the state see him as the “spirit” behind all Aregbesola’s audacious decisions in the last seven and a half years.

Oyetola is from Iragbiji in the Central Senatorial District which has produced two governors for almost 12 years out of the 27 years the state has existed. The opposition against him is based on sentiment as there is not a doubt about his capability and competence. A big challenge to Oyetola’s ticket, however, is the inability of the APC to nip in the bud, the grievances that have arisen from its July primary. There is a crack in the party’s camp.

Adeoti’s ADP enjoys a considerable following at the grass-roots level. The candidate is from Iwo, which is about the largest town in Osun West Senatorial District, while his running mate, Professor Durotoye, is from Osogbo, the capital city. Osogbo and Olorunda local government areas constitute the metropolis of the state and so the political bride every candidate must woo.

Fatai Akinbade, who is from Ogbaagba, near Iwo in the West Senatorial district, is perhaps the longest serving politician among the five major candidates. He served three successive military administrations in the state as commissioner between 1994 and 1998. He became the PDP chairman and led the party to victory in 2003 during the party’s conquest of the South-West except Lagos. He was Secretary to the State Government for seven years. A founding member of the PDP, Akinbade once went to the Labour Party and returned to the PDP before leaving again to pick the ADC ticket. The Olusegun Obasanjo-backed party winning this governorship election may appear to be quite testing but the party’s deputy governorship candidate, being a female, should give the womenfolk something to cheer. The public support for Justice Oloyede during her “whistle blowing” days had been based more on morality than politics. Prior to that time, she was relatively unknown and it remains to be seen if she will be able to win over the Osun women in this dispensation.

Nurudeen Ademola Adeleke, the candidate of the PDP, enjoys his family’s political goodwill and wherewithal. The two factors are important for electioneering. However, one year into his membership of the Senate, not so much about him has been seen or felt. He is from a great dynasty in Ede that has produced three senators – from the late patriarch in the Second Republic to the elder brother and now to him.

Ede, the hometown of the Adelekes, is in Osun West Senatorial District. Among the five major candidates for the coming election, three are from that district alone, each with his stronghold. And the Adelekes’ traditional strongholds have always been Ede North, Ede South and Egbedore local government areas. So far, the candidate has been undaunted by the controversy trailing his secondary school certificate with no knowledge yet of how much of an albatross that would mean for the serving senator in this election. The party parades a septuagenarian as its deputy governorship candidate in the person of Honourable Albert Adeogun, who is a serving member of the House of Representatives. In an era where the refrain is not-too-young-to-run, some political commentators are of the view that this might pose a challenge for the PDP.

However, the SDP parades a young deputy governorship candidate in Azeez Olayinka Lawal, who is from Osun West. But while he may be attractive to youths, it is believed that he has yet to prove his mettle on the political turf. SDP, it is believed, is yet to be well grounded in Osun State, even though the people know it as Chief Olu Falae’s party. Until Senator Iyiola Omisore and his team left the PDP for the party, the SDP was almost non-existent in Osun. Omisore has been a politician of note since the days of the defunct United Nigeria Congress Party (UNCP) in the mid-90s, but the man from Ile-Ife in Osun East Senatorial District has had so much to contend with in recent times. The politician being edged out of the PDP, a party he almost singlehandedly controlled until some 18 months ago, tells a story about his current political influence. Winning the five local government areas in Ile-Ife may seem to be a walk in the park for him but whether he would be able to get bloc votes elsewhere remains to be seen. At any rate, the Omisore political structure cannot be underrated in the politics of Osun State.

As things are, the September 22 election appears too close to call. There is no likelihood of any of these five strong contenders getting a simple majority to become elected. There are too many contenders, each with his support base and, therefore, none of them may be able to win it outright. In that case, the dictates of the Electoral Act may come into play. Thus, Osun may be in for a gubernatorial election that would go for a second voting or runoff.

Section 179 of the 1999 Constitution (as amended) deals with gubernatorial election. In Sub-section 2, it declares that “Where there are two or more candidates, the winner must have the following: (a) the highest number of votes cast at the election and (b) not less than one quarter of all the votes cast in each of, at least, two thirds of all the local government areas in the state.”

With these constitutional provisions and explanations, it looks like September 22 is not likely to give the candidate who wins by the majority votes the opportunity to get a clean win. Winning 25 per cent in 30 local government areas may be tough. A second ballot involving the majority vote winner and the runner-up is more likely to be what pans out.

That being it, INEC shall, within seven days of the result of the election, arrange for another election between the two leading candidates who emerge. Yes, a runoff is possible.

This has not happened before in our governorship election all over the country. But there is a reference in a primary election.  It will be recalled that in Osun State in 1991, Dosu Ladipo and Isiaka Adeleke slugged it out in the SDP primaries. Osun had 23 local government areas then. In the first ballot, Ladipo won 15 local government areas, while Adeleke won only four. What Ladipo needed was one more local government. Adeleke beat him to the SDP ticket in the runoff and went on to win the governorship election that was held on December 14, 1991. He defeated Bayo Salami of the defunct National Republican Convention (NRC) by a little over 5,000 votes.

As things stand now, it looks like Osun is set for a runoff as next Saturday’s election is not likely to produce a clear winner. That election looks too close to call. The political gladiators have between now and then to decide. Otherwise, Osun electorate may have to do it again seven days later, that is, Saturday, September 29.

Shittu-Alamu, a veteran broadcast journalist, sent in this piece from Osogbo.

Struggle between child’s survival and coping with stigmatisation

She never told me she has another child; climbed the fence to go to church —Man