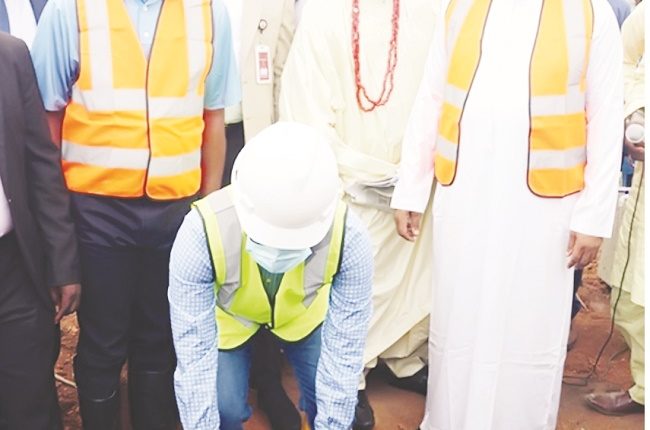 THE Osun State governor, Alhaji Gboyega Oyetola, has commended the Ahmadiyya Muslim Jama’at for the decision to establish its Minaret International University and for citing the institution in the state’s town of Ikirun.

Oyetola gave the commendation at the turning of sod and foundation laying ceremony of the university.

The governor said his administration considered education with a focus on moral development and unlocking of the creative abilities of young people an essential tool for the building of upright leaders and transformation of the society.

“The expediency of these two tools is even more compelling today that society requires moral and ethical rebirth. It is therefore heartening that Minaret International University is combining religion and education to build the character of our youths and help them acquire knowledge to deliver the future that we desire,” Governor Oyetola said..

According to him, it is delightful that with the proposed university, Osun State is now home to more tertiary institutions that are contributing to the development of the state and Nigeria as a whole.

He said: “The establishment of Minaret International University is a welcome addition to this family. As a notable, knowledge-seeking and religion savvy institution known for its tradition of excellence, I have no doubt that Ahmadiyya Muslim Jama’at will build a university that is a centre of excellence in deed and in truth.”

The governor expressed confidence that Ahmadiyya, as an international organisation of repute as well as a frontline Muslim group in the propagation of the Islamic faith, would produce graduates who will be problem solvers and job creators.

In a remark, the amir (head) of the Ahmadiyya Muslim Jama’at Nigeria, Mr Azeez Alatoye, said the organisation was determined to build a university that would compete favourably with its counterparts across the globe.

He said the proposed university would be a world-class tertiary institution for the intellectual and manpower development of Nigerians for sustainable socioeconomic development in Nigeria, Africa and the world.

Alatoye said: “We are fully prepared and ready to face the challenge of a faith-based higher institution at the undergraduate and postgraduate levels with the establishment of the Minaret International University in Ikirun and another campus at  Agbonbiti in Ile-Ife.

“The university will start with three faculties, namely, Humanities, Sciences and Education. The remaining faculties will come up progressively. The satellite campus will be on another 600 acres of land at Agbonbiti in Ile-Ife  for a totally agricultural and farm settlement centre.”

Apart from its vision to equip students with academic excellence, the amir stressed that Minaret International University would instill in them moral discipline and spirit of selfless service for socio-economic advancement, emancipation of the people and commitment to global cooperation for the development and unity of humanity.

Alatoye added that the tuition fees would be moderate and affordable as the university has the philosophy of sourcing funds from religious bodies as well as giving opportunity for students to generate income through practical application of their studies in ventures sponsored by the institution.