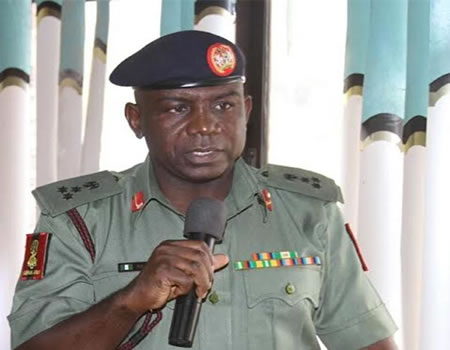 THE Director General of the National Youths Service Corps (NYSC), Brig. Gen. Suleman Kazaure, on Tuesday, absolved corps members who participated as ad-hoc staff in the last Saturday governorship election in Osun State, from any act of misconduct during the election.

Kazaure, who stated this in Akure, Ondo State capital, during the opening ceremony of the 2018 NYSC Annual Management Conference, hosted by the state, commended the corps members who participated as ad hoc staff during the election.

The NYSC boss who denied the rumour about the involvement of a corps member who absconded with electoral materials said there was no report about any misconduct from the corps members who participated in the election.

He said, “From what we have gathered from Osun State election, the conducts of the corps members were excellent. They conducted themselves very well and I am pleased with their conducts.

“I also want to say that no corps member absconded with the electoral materials, I don’t think that is true, We have our representatives there and I was adequately briefed about everything that happened there, so there was nothing like that. I am just hearing this for the first time. It is not true.”

Explaining the purpose of the Conference titled “NYSC at 45: Consolidating Gains and Creating Opportunities”, he stated that the conference would afford the agency to review the operations and policies of the scheme for the subsequent years.

According to him, the Federal Government has approved the enrollment of the corps members into the National Health Insurance Scheme, as part of the efforts to improve the medicals in the orientation camps.

The NYSC DG also disclosed that efforts were being made to increase the monthly allowance of the corps members currently at N19,800, assuring that it would take effect with the new national minimum wage.

Akeredolu noted that the main objective of the scheme was to foster national unity and integration of the different ethnic groups in the country for accelerated development and progress of the nation.

Akeredolu who was represented by his Deputy, Hon. Agboola Ajayi said as part of the effort to appreciate serving corps members in the state, the present administration in the state has instituted a special cash package for corps members who distinguished themselves during the service year as a way of appreciating their contributions to the development of the state.

Earlier the Director, Planning, Research and Statistics of NYSC, Mrs Bose Okakwu said the choice of Ondo State in hosting this year’s conference is informed by the unrelenting support, uncommon hospitality, and love the scheme enjoys from the government, stakeholders and the people of the state.

She noted that quite a number of intervention projects have been carried out by the state government at the NYSC permanent orientation camp in order to guaranteed the safety and welfare of Corp members throughout their service year in the state.

In her remarks, the chairman of the NYSC Governing Board, Ambassador Fatima Abubakar, decried the alleged inability of some state government to live up to their statutory responsibilities in the area of provision of camp facilities.

She, however, said the governing board will continue to complement the efforts of the DG towards “ensuring that state live up to their statutory responsibilities through advocacy visit to the state governments”

Anambra: NYSC vows not to use corps members as election officials in Idemili, Ogbaru