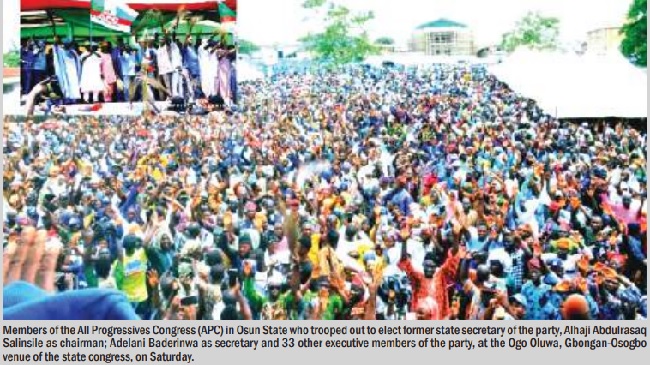 THE immediate past secretary of the All Progressives Congress (APC) in Osun State, Alhaji Rasaq Salinsile, was, on Saturday, elected chairman of the party at a well-attended state party congress.

As early as 7a.m., members of the party in the state, numbering around 10,000, gathered at the open field at Ogooluwa area of Osogbo, to participate in the party’s congress that held across all states of the federation.

The new executive members will steer the affairs of the party in the next four years.

In his acceptance speech, Salinsile extended an olive branch to those who have gone astray from the progressive ideals, promising to reposition the party for victory in the coming elections.

“Dear APC members, with my election as the chairman of APC in Osun, it is my belief that we have all taken a promising and informed decision to redirect the party affairs and revive the progressive tendencies…

“I shall work towards the actualisation of a prosperous APC and take the party to an enviable height. We have made sacrifices for this party and we will not allow it to sink or collapse. We will survive this current crisis, intimidation, threat and oppression. We have been strong, but I still want to urge us to be stronger in a few months to come. Our victory is near,” the new party chairman stated.

Members of the party ,who were present, judged the congress as peaceful and devoid of any brigandage.

A political pressure group in the state, The Osun Progressives, however, condemned the attack on the congress venue. In a statement signed by the chairman of the group, Reverend Lowo Adebiyi, the group accused Governor Gboyega Oyetola of lording himself over party member.