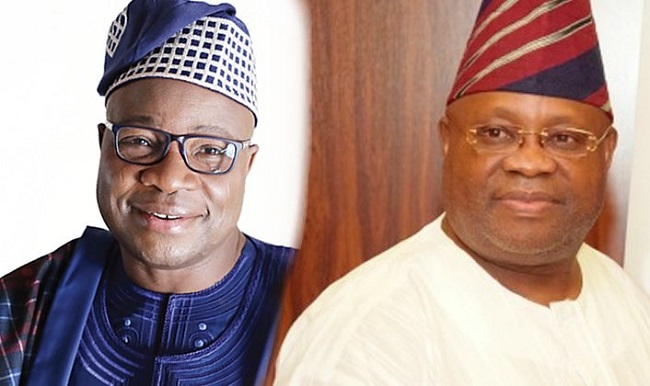 Preparation for the contest of the 2022 Osun State gubernatorial election under the platform of the Peoples Democratic Party (PDP) seems to have taken a pugilist dimension between Senator Ademola Adeleke and renowned business mogul, Dr Akin Ogunbiyi as duo political supporters now in a war of words over who is more qualified to govern the state between them.

The exchange of hot words between the supporters came after Osun State Federal Lawmaker, representing Ede/Egbedore/Ejigbo Federal Constituency at the National Assembly, Hon Bamidele Salam, who said at a programme that, “I know, Dr Akin Ogunbiyi very well; he is a brother that I respect so much, but you know that when we talk about politics, we talk about the name, influence, networking, Ogunbiyi is nowhere near the Adeleke. I give him due honour, he is a very good and capable man but he can also be very useful in other areas but certainly not as the governor in this time around.”

Felt irked by the claims, the political campaign group of Dr Akin Ogunbiyi on Wednesday frowned at the statement, which it described as unfortunate and derating.

The group, in a statement signed by the Director of Strategy, “Idera de Movement”, Kunle Omolere, maintained that Dr Akin Ogunbiyi is eminently qualified and possesses the required qualities to lead the PDP to victory.

Omolere affirmed that “desperate attempts at blowing off Ogunbiyi’s candle would not brighten Ademola Adeleke’s chances in the 2022 governorship election.

“Ogunbiyi is better placed and, given his track record of service to humanity and growth, having stimulated several businesses from nothing to stardom will make a good governor if saddled with the lofty responsibility than accidental diploma holder.

“It is shameful and rather ridiculous seeing Bamidele and other supporters of the absentee aspirant banking on irrelevancies, guilt and manipulation to push his ambition instead of rolling out the unique selling points of the man, if he has any, apart from his good dancing steps.

In spite of the huge investment in the water sector by the government and international organisations, water scarcity has grown to become a perennial nightmare for residents of Abeokuta, the Ogun State capital. This report x-rays the lives and experiences of residents in getting clean, potable and affordable water amidst the surge of COVID-19 cases in the state…Osun 2022 gubernatorial poll  Osun 2022 gubernatorial poll