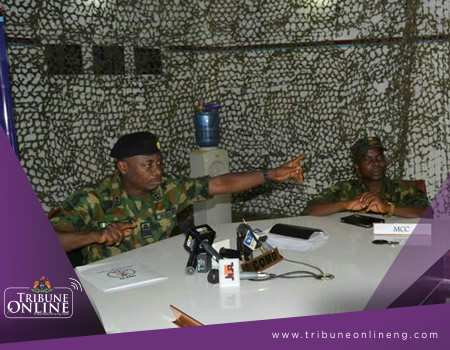 Commander OPDS, Rear Admiral Apochi Suleiman, made the vow while briefing journalists on latest developments at the local government on Friday in Yenagoa, Bayelsa State.

He disclosed that after the killing of notorious militant, Ossy Ibori and others on April 30, other “arrests were made and some quantities of items of munitions were recovered.

Following that successful operation, our troops carried out a raid operation to clear remnants of miscreants/militant camps, shrines and hideouts used as safe haven were cleared.”

He added that the “remaining militants fled when their leader was killed in action,” but would be fished out for prosecution by the troops.

Rear Admiral Suleiman also disclosed to journalists that the Ajakpa-Bolowo waterway earlier blocked by Ibori and his gang for the past four months had been cleared for a free flow of maritime activities.

The OPDS commandant, who commiserated with families of the fallen heroes in the course of the operation, said troops would not relent until the Niger Delta region was safe and peaceful for good life.

“But we will continue to maintain our presence in the general area in order to deter and apprehend all unrepentant criminals terrorising the peace loving people of the communities.

Let me also inform you that our troops have successfully unblocked AJAKPA – BOLOWO waterway which has been blocked by Ossy Ibori gang for the past 4 months.

It is now cleared and opened for free flow of water navigation by the general public.

Our troops will continue to patrol all waterways in the Niger Delta include southern Ondo where militants are currently terrorising the general public, to ensure there is no hindrance of any form to public peace.

I would like to use this opportunity to condole the families of our fallen heroes, who pay the supreme price in the course of maintaining peace and security in this operation.

They were dedicated, gallant laden with vigour and determination to protect their fatherland. I assure you that their sacrifice will never be in vain.

Gentlemen of the press, let me use this opportunity to also commend the general public especially non-violent youth of Niger Delta and the press for all the support given to us in achieving our mandate.

Which remains “To Protect Oil and Gas Infrastructure and Deter/Prevent Militancy, Sea Robbery, Crude Oil Theft and Other forms of Criminality within Joint Area of Operation,” he stated.

It will be recalled that early in the week at 8.45 p.m on Sunday, 30 April 2017, troops on special operations allegedly repelled a deliberate pre-emptive attack at Ajakpa community of Ese Odo Local Government of Ondo State.

During the gun duel, kidnap kingpin, Ossy Ibori, was killed along some of his other gang members.