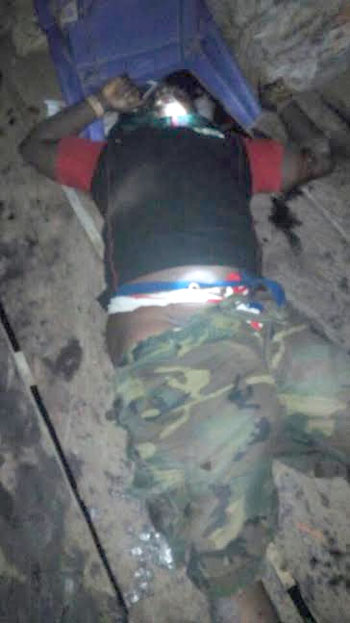 AFTERMATH the killing of the leader of the dreaded militant group, Ossy Ibori in Ajakpa in Ese Odo local government area of Ondo state, the people of the community have raised alarm over the destructions of houses in the area by men of the military operatives known as Operation Delta Safe.

The people of the community who have earlier expressed fears over possible reprisal attack had been vacating the coastal town since Monday after the killing of Ibori by the military operatives.

Speaking on behalf of the community during a Press conference in Akure, Ondo State capital, Tonye Ebitibituwa, disclosed that many residents of Ajakpa community had been rendered homeless after the military invaded the town in the early hours of Wednesday.

According to him, the people of the community were not against the killing and arrest of any criminal elements in the area to maintained peace but frowned over the destruction of properties in the community by the military operatives.

He said “in the early hours of today, some military operatives invaded Ajakpa in six gun boats and set the whole community ablaze.

The community did not in any way support or encourage the action of Ibori and his group and we wondered the reasons behind the setting of our homes on fire by the military.

Ebitibituwa who was a retired Commissioner of Police, explained that the action of the military personnel has turned the whole town to a ghost town, saying that many people have been rendered homeless with no food and other basic necessities.

He said no fewer than 30,000 people of the community have been rendered homeless while about 5,000 houses were torched by the military on Wednesday morning.

He however appealed to the state government to quickly intervene in the matter and stop the military from further destructions while he also urged the military to allow its action to wear human face and to adhere strictly to the rule of the game.

He called on the state governor, Mr Rotimi Akeredolu, to safe the people of Ajakpa from the military attack and said “we are calling on the Ondo state government to put every machinery in place to save the lives of innocent people who have been displaced and are now helpless.

“The government should put in place a rescue and rehabilitation committee so safe the lives of our teeming population trapped in various hideout over the military attack on our community.”

He also called on the authorities of the Nigerian Army to halt the hostilities in the Ajakpa coastal community and its environs to stem down the humanitarian crisis the action of the military is causing.

However, the Public Relations Officer of the 32 Artillery of the Nigerian Army in Ondo State, Captain Ojo Adelegan, denied military involvement in the burning of houses in Ajakpa community

Accordingly to him, the soldiers are in Ajakpa to maintain peace and flush out other member of the Ibori militant group who are been terrorising the people of the coastal communities.

Adelegan said “our men never involved in the burning of the Houses in Ajakpa. Our business is to maintain peace in the area and to flush out other members of the militant group who are still hiding in the creek.

“We want to assure you that Nigerian Army in Ondo will not give room to militancy in Ondo State. We are not involved and if there is any crisis they should trace or look elsewhere to know where the crisis is coming from.”