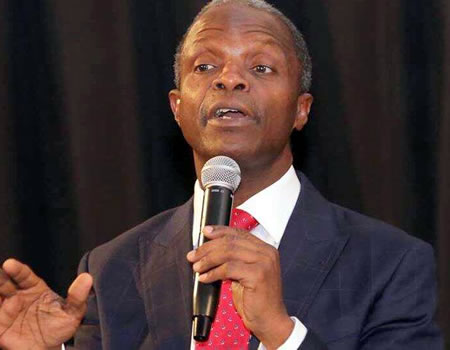 Osinbajo made the plea in Kaduna on Friday in an interview with newsmen shortly after his on-the-spot assessment and readiness of the Kaduna airport.

He urged the airlines to bear the situation and be ready to work with the Federal Government to achieve its objective of delivering a safe and secure aviation sector.

According to him, one thing that is clear is that not all foreign airlines have declined to come here but we have met with a great number of them that are willing to come.

“I think we need to tell the foreign airlines that this is an emergency and a temporary arrangement and they should be ready to work with us because we are concerned about safety and comfort.”

“They are here also to see things for themselves and we would be happy if they work with us,” he said.

The acting president, who was at the airport to inspect the progress of work and its readiness to serve as a temporary substitute for Abuja airport between March 8 and April 19, expressed satisfaction with the level of work.

He explained that as a local airport, a lot of work needed to be done to bring it to the kind of standard that would be required.

Osinbajo, however, directed the contractor to ensure speedy completion within the next five days to enhance smooth operations at the airport.

“So we think it will be in a complete state of readiness by Wednesday, but I expect that within a very short time, the job will be done,” he said.

Mr Tanimu Abdullahi, Managing Director of Dari Investment Limited, the contractor handling the project, gave assurance that the project would be completed before the March 8 deadline.

Abdullahi said the project was 95 per cent completed, adding that the conveyor belt and all the security gadgets had been installed as well as every other critical thing.

“As for the fingers, we will fix them after the six week operation since it will not disrupt operation because we cannot start rushing and it is a technical issue,” he said.

Mrs Firiehwot Mekonnen, Manager, Sales and Traffic, Ethiopian Airlines, told newsmen that they had inspected the facilities at the airport and were ready to fly the route.

Mekonnen said the airline would maintain its Abuja daily flight schedule at the Kaduna airport, and fly its Boeing 777-30 with daily schedule.

“We are going to maintain our usual schedule from Abuja to Addis Ababa. So now it is going to be Kaduna-Addis Ababa and Addis Ababa-Kaduna,” she said.

The News Agency of Nigeria reports that barely a week to the closure of Abuja airport and diversion of its flights to Kaduna, the Acting President took an inspection tour to the airport on Friday.

Osinbajo, who was accompanied by the Minister of Transportation, Mr Rotimi Amaechi and Minister of Information, Alhaji Lai Mohammed, expressed satisfaction with the progress of work at the airport.