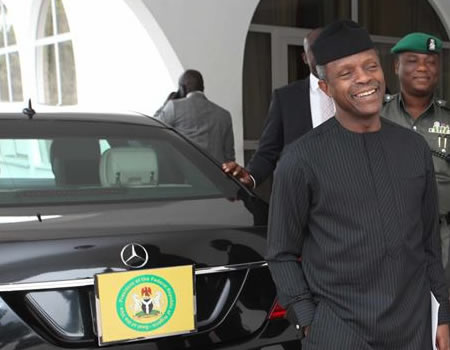 According to a report by the News Agency of Nigeria (NAN), the visit to the state was in continuation of his tour of the zone for peace talks with oil communities and leaders.

Osinbajo said at the stakeholders meeting that the oil industry was the dominant source of foreign exchange earnings for the country and that it was time the country added value to crude oil.

According to him, adding value to crude oil would bring enormous economic benefits to oil-bearing communities.

Osinbajo assured that the Federal Government was committed to rapid development of the communities and urged stakeholders to support the peace efforts.

He pointed out that oil producing communities were fundamental to the development plans of the Federal Government and urged stakeholders to embrace peace for development to take place.

He solicited the support of the Federal Government to tackle development challenges facing the state, noting that the difficult terrain had made the cost of providing infrastructure quite exorbitant for the state government to cope with.

President, Ijaw Youths Council, Mr Udens Eradiri, appealed to the Federal Government to legalise the operation of artisanal refineries to create jobs for the teeming youths and save the environment.

He said that if legalised, the refineries would operate in an environmentally-sustainable manner, adding that job creation for the youths was a panacea to militancy.