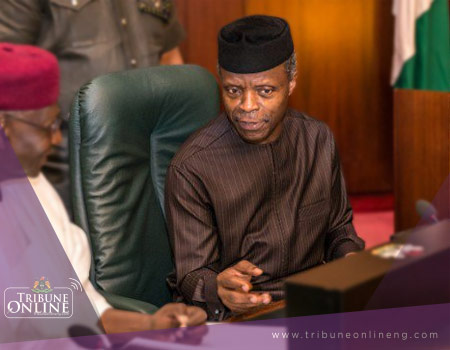 ACTING President Yemi Osinbajo has described late Dr Barnabas Oloruntoba as a great Nigerian who should be celebrated for serving the country well.

Osinbajo spoke to newsmen on Saturday in Ilorin, after the burial of late Oloruntoba; father-in-law to former Minister of Agriculture, Dr Akinwumi Adesina.

“When we look at how and what people have said about papa, you will be forced to agree that we need to celebrate him.

“He served the country well and rose to the highest position of his career and was honoured by the nation, among the 100 most significant people in our centenary celebration,” the VP added.

According to Osinbajo, because of his meritorious service to the country, Pa Oloruntoba was honoured with Officer of Federal Republic of Nigeria (OFR).

In his own remarks, Gov Abdulfatah Ahmed said the late Pa Oloruntoba lived a life worthy of emulation.

“With the calibre of people who are here today, we can see that papa lived a life worthy of emulation.

“For those he left behind, we hope they will leave better examples than what papa left.

“He lived well. His legacies will continue to live on because of the valuable virtues he left behind.

“We will continue to uphold these legacies and values which he lived for God,” Ahmed added.

He was appointed Federal Permanent Secretary in 1975 and retired voluntarily from public service in 1979 at the age of 51.

Efe, BBNaija winner says, video for “based on logistics’’ song out soon