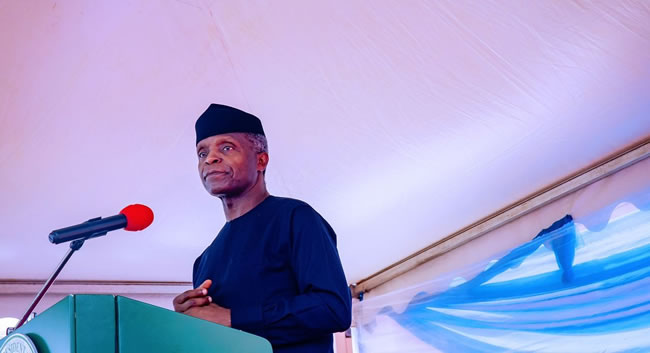 Speaking at the opening of the meeting, the Vice President said the meeting was necessary to give stakeholders in boundary issues the opportunity to understand the Act establishing the National Boundary Commission (NBC) and the roles they must play to mitigate misunderstandings that emanate from it.

Osinbajo noted that politicians are in the habit of playing games with lands, irrespective of the fact that some people attach so much emotions to land and boundary issues.

He stated before the meeting went into a closed session: “The idea of this meeting is to discuss the Act, inter-state rancour and various misunderstandings which the Commission from time to time deals with, with the stakeholders. For instance, we would jointly review the works of the Commission, we cannot stress this enough that land is an emotive issue, most times fatalities evolves from land disputes.

“There has to be an understanding of who has access to land because in some cases these are tied to ancestors. But these issues should not result in violence. in some cases resolving these disputes can only be done at the highest levels of governance.

“Let me remind us that we are not here to resolve any particular state border crisis, but perhaps this meeting will review how disputes can be settled without political interference because very often when politicians play games with lands, it results in creating tensions.”

Also present were ministers of Interior, Foreign Affairs, Defence, and regional members of the National Boundary Commission among others.

Verdict: The claim is false. The content of the article published by these online platforms is not new; it has been recirculated several times and has been debunked.Osinbajo, deputy governors meet over boundary crises