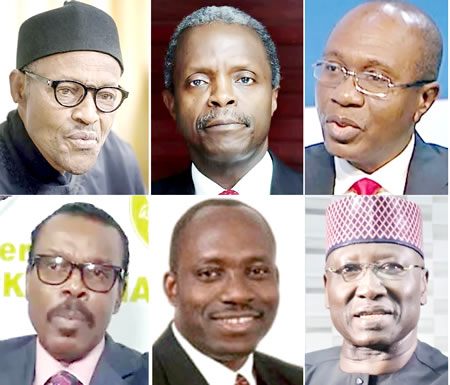 LEON USIGBE writes on the implications of the appointment of Vice President Yemi Osinbajo as the chairman of the new economic sustainability committee.

SOME cynics think that as the vice president, Professor Yemi Osinbajo’s role has suffered a downgrade. They say that he has been reduced to mere showing up at wedding and burial ceremonies, rather than the high-velocity craftsman he was for the administration earlier on. For presidential villa insiders, what may account for this perception is that the once endless stream of visitors to his office has thinned out to a trickle, since he was stripped of the headship of the Economic Management Team (EMT).

The Osinbajo-led EMT worked with an already articulated vision of the administration and it projected a clear idea of the direction in which to move the economy, while leveraging on agriculture, infrastructure and the enhancement of security.

Broadly, the team was saddled with the task of reviving agriculture working with key stakeholders to “build an agribusiness economy capable of delivering sustained prosperity by meeting domestic food security goals, generating exports, and supporting sustainable income and job growth. The team was supposed to actualise the Economic Recovery and Growth Plan (ERGP) to pull out Nigeria from the recession it slid into in the second quarter of 2016. The reason the government wanted the EMT to press for the ERGP, as explained in its policy document, was that “it recognises that the economy is likely to remain on a path of steady and steep decline, if nothing is done to change the negative trajectory.” So, the ERGP was supposed to “tackle the causes of the recession and ultimately change the national economic trajectory in a fundamental way.”

Beyond that, the Osinbajo-led team presided over the “New Vision for Niger Delta, North-East Relief and Infrastructure, Social Investment Technology and Innovation.”

The advisory council was constituted in such a way that it would report directly to President Buhari and could request for unscheduled meetings, if it feels that it is necessary. It inherited the responsibility to advise the president on economic policy matters, including fiscal analysis, economic growth and a range of internal and global economic issues working with the relevant cabinet members and heads of monetary and fiscal agencies. These were virtually the functions of the disbanded EMT that the vice president headed.

The birth of the EAC took away from Vice President Osinbajo his highestprofile assignment of weekly meetings to tinker with the economy. Some cynics believe that Buhari’s action was a direct hit on the vice president’s ego. No reason was ever propounded for the sack of the EMT, even though voices had become strident from every angle of the country complaining that the administration had not managed to transform the lives of Nigerians in its fifth year at the helm. There were suggestions that the comatose economy under Osinbajo’s best effort was an indictment on his team’s capacity to turn things around to meet the huge expectations of the people, and this left the president with no choice but to act the way he did.

Many observers believe that Vice President Osinbajo would have preferred that things stay the way they were as far as the EMT was concerned, but that not being the case, he must be brave to strike a delicate balance between the preservation of his dignity and maintaining absolute loyalty to the president. Now, the ball may have rolled back to his court.

Last week, the Secretary to Government of the Federation (SGF), Mr. Boss Mustapha, announced that President Buhari had approved that a committee for economic sustainability, to be headed by the vice president be constituted. Following the 2016 recession, the Nigerian economy is once again on the threshold of another painfull quagmire with free-falling crude oil price making nonsense of all earlier projections. Analysts saying that it is no longer ‘if,’ but ‘when’ Nigerians will begin to feel the pangs of the envisaged new round of economic malaise as a direct consequence of the novel coronavirus global pandemic.

President Buhari has already authorised a review of the 2020 budget, convinced that the N10.59 trillion provisions for capital and recurrent expenditures are no longer feasible. He seems to reckon that a driver will be required to steer the economic ship out of these troubled waters. The lot has again fallen on the energetic Vice President Osinbajo.

Even though the form and scope of the committee for economic sustainability remain on the drawing board, its headship is being interpreted as a rebound for Vice President Osinbajo, as it is expected to restore his lost influence on the running of the nation’s economy.

Thus, Nigerians are expectant that with the new development, the vice president has got yet another opportunity to prove his mettle as a sound administrator. All eyes are on Professor Osinbajo in the task of saving the country from another round of economic decline, even as this stares the nation in the face during a delicate period as this.