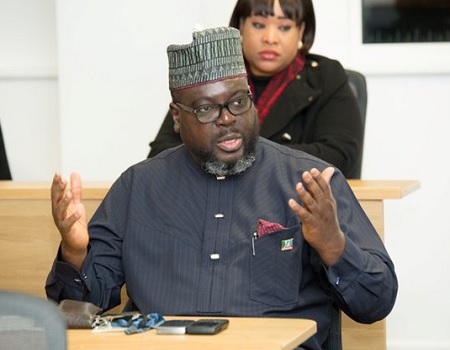 The United Kingdom chapter of All Progressives Congress (APC) has advised all elected officials of the party to focus on delivering their mandates.

It called for less attention to the issue concerning the sack of its National Chairman, Mr Adams Oshiomhole.

Mr Ade Omole, leader of the chapter said this in an interview with News Agency of Nigeria (NAN), on Sunday, in Abuja while reacting to the bickering in the party.

Omole said that the recent wrangling within the party’s hierarchy and the call by some of its members that Oshiomhole is sacked was not in the best interest of the party.

“This is a rallying call to all APC leaders and members at home and abroad to unite behind comrade Oshiomhole and focus on the mandate willingly given to us by the Nigerian electorate,” Omole said.

He advised that no gang up within or outside the party should be allowed to derail Oshiomole’s leadership in providing positive leadership for the party.

Omole said that the party had continued to grow successively stronger and more united nationwide because of Oshiomole’s leadership style.

He described those calling for Oshiomole’s sack as the fifth columnists who left the party ahead of the 2015 general elections and were now hell-bent on bringing it down.

“Oshiomhole is the Moses of the party, who led it across the red sea during the rebellion of the fifth columnists prior to 2019 general elections,” Omole said.

He stressed that this was not the time to call for Oshiomhole’s sack if the party must remain united as one big family to continue winning elections.

Omole said the party’s recent electoral victory in Kogi and Bayelsa states was a masterstroke made possible by the smooth working relationship between its leadership and government under Oshiomhole.

“With Oshiomhole at the helm of affairs of the APC, there will be apprehension in the camp of the opposition because of his doggedness and no-nonsense approach to issues,” the APC UK leader said.

This, he said, was the reason members of the opposition were doing everything possible to get him out of office using some APC members.

According to Omole, the discipline, love and unity within the APC are made possible by Oshiomole’s leadership style and should not be truncated.

He noted that such character could not be said about the party before Oshiomhole became its national chairman.

Omole further noted that Oshiomhole may not be perfect, because as humans, nobody is perfect, but had been passionate and committed to the advancement of the country and the party.

“This is the time to support him in moving the country and the party to the next level of progress and economic development.

“I am appealing to those who may feel wronged or offended by the perceived party-building actions of Oshiomhole to sheathe their swords.

“They should join hands with the party’s leadership and utilise the reconciliation process headed by President Muhammadu Buhari to articulate their grievances,” Omole said.

NAN reports that some APC governors and chieftains had recently called for Oshiomole’s sack, accusing him of high-handedness.