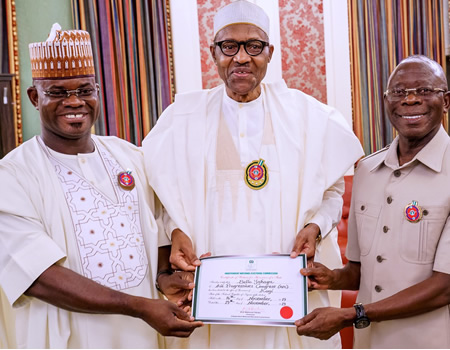 The National Chairman of the All Progressives Congress (APC) on Thursday formally presented the Kogi Gov.-elect, Yahaya Bello, to President Muhammadu Buhari at the Presidential Villa, Abuja.

News Agency of Nigeria (NAN) reports that the re-elected Governor had earlier received a Certificate of Return from the Independent National Electoral Commission (INEC) in Abuja, today.

NAN observed that the meeting between the president and the re-elected governor alongside the APC national chairman was held behind closed doors.

NAN reports that the Returning Officer of the Nov. 16 Kogi governorship election, Prof. Ibrahim Garba, had on Monday declared Yahaya Bello as winner of the election after polling 406,222 votes.

ALSO READ: Women are the most significant creature on the planet ― Seyi Awolowo

President Buhari had on Monday met behind closed doors with Bayelsa Governor-elect, Mr David Lyon, at the Presidential Villa, Abuja.

Women are most significant creature on planet ― Seyi Awolowo