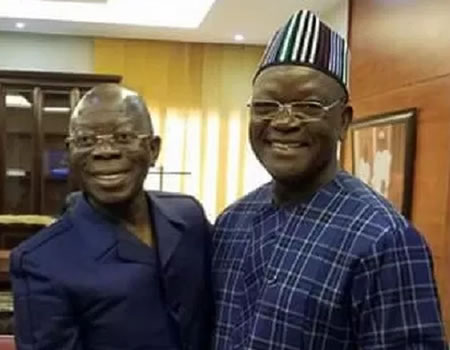 conductorortomGovernor Samuel Ortom of Benue State has threatened a legal action against the national chairman of the All Progressives Congress (APC), Comrade Adams for what he described as defamation of character.

The governor, through his counsel, Samuel Irabor, noted that Oshiomhole had during his press conference on July 27 defamed his character, and demanded for apologies through an advertorial in 10 national dailies and electronic media.

Failure to do this, the governor said he would proceed to the court to claim N10billion for defamation.

According to statement by his counsel: “A letter of retraction/apology must be simultaneously published in 10 national dailies circulating  in Benue State, as well as a paid advertorial to the same  effect on the prime beats of the NRA, AIT, Channels, TVC, ITV (Benin), Radio Nigeria, Radio Benue and Harvest FM, Makurdi.

“10 billion Naira only for the client as punitive, general exemplary and aggravated damages.”

The governor alleged that the APC chairman had  made wild allegations against   his administration on  security votes, non payment of salaries and the alleged  Benue Christian complicity in the recent killings in the state.

“It boggles the mind to begin the process of thinking that led to your unconscionable statement that ‘Benue Christians” are responsible for the mass killings and sustainable genocide there own people,” Ortom stated.

The governor’s counsel said that since his client exercised his political association by moving to a party that guaranteed his kinsmen were not made an extinct race, Oshiomhole  had  embarked on campaign of hatred and propaganda against his person and personality.

He, however, called on the national chairman to, within seven days of receipt of the letter, meet all the demands or face legal action.