Ortom distances self, state from quit notice on Fulani herdsmen 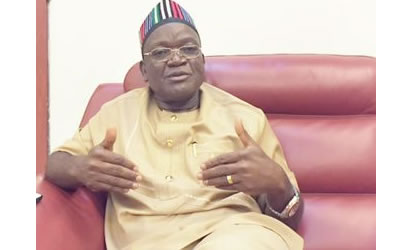 GOVERNOR Samuel Ortom of Benue State has distanced his state from the quit notice slammed on Fulani herdsmen by a group called Middle Belt Renaissance Forum.

According to the press statement issued by the Chief Press Secretary to Benue State governor, Mr Terver Akase a copy made available to Tribune Online in Makurdi on Saturday enjoined the people of the state to disregard the quit notice saying, ‘the notice will have no impact or effect in Benue State’.

The governor in the statement called on security agencies to investigate the matter and apprehend those behind the quit notice.

He said, ‘Benue State has enacted a law prohibiting open grazing to pave way for the establishment of ranches and the implementation of the law is scheduled to commence in November this year.

“The governor added that the law does not provide that herdsmen should leave the state but rather encourages herdsmen and any other individual who wishes to rear livestock in the state to do so within ranches.

“Governor Ortom urges the people of the state to remain calm and go about their normal businesses as anyone found to be fomenting trouble on account of such a quit notice will be arrested and brought to justice.

“He calls on Nigerians to imbibe the spirit of coexistence as the constitution allows all nationals to reside anywhere in the country provided they don’t constitute threat to security.

“The Governor also emphasizes the need for Nigerians to shun hate speeches capable of plunging the nation into unnecessary crisis,” the statement concluded.

It will be recalled that the group had in a statement made by its convener, Jones Alfa in Abuja early in the week gave October 1st deadline to fulani herdsmen in middle belt region.

The group had anchored their stand on the activities of the Fulani herdsmen in the region which it said had caused too many pains, agony and loss to the people of the region.

The herdsmen through their leaders, Alhaji Jaoji Isa and Alhaji Garus Gololo from Taraba and Benue states respectively had stated that their members would not in any way leave any part of the region.