Ortom calls on security chiefs to call Akume to order 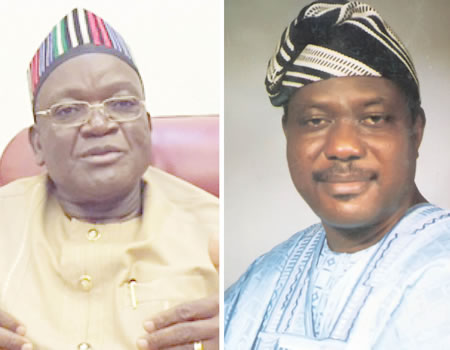 Benue State Government yesterday directed the security agencies, to immediately bring Senator George Akume to order for causing lawlessness and threats to peace after the successful conduct of the presidential and national assembly elections in the state.

The government gave the directive in a statement signed by the special adviser to the governor on Media and ICTs, Mr Tahav Agerzua, which a copy was made available to our correspondent in Makurdi.

The statement is coming on the heels of a sudden procession of Senator George Akume in major streets of Makurdi.

Agerzua alleged that Sen. Akume as an immediate reaction for his defeat at the poll, instigated his small band of supporters in his hometown of Wannune to block the road and harass passersby as well as PDP members in the area.

He further said, as a followed up, Akume moved around the streets of Makurdi today (Wednesday) and even attempted to force his way into Government House to cause trouble, even as the APC lost most of the elections in the State.

According to Agerzua: “what one expected from Akume for the patronage from the public is to show gratitude to the people of the state in general and the zone ‘B’ in particular for elevating him to various leadership positions including Governor and Senator.

“However, in his usual pride and megalomania that led to his fall, Akume has chosen to deprecate the democratic process of which he has been a major beneficiary for 20 long years.”

“A close look at election results from Akume’s senatorial district, indicates clearly that the people had decided to retire him from politics and his strangulating influence as they voted massively for president Buhari, Orker Jev (PDP) and avoided voting for the incumbent Senator”, Agerzua said.

He intimated that the state government has received reliable intelligence reports about Senator Akume and his dwindling followers concluded plans to recruit militia to assist them to prosecute the remaining elections in the state; stating that this will, however, not be tolerated as the conventional security apparatus will be deployed to contain the challenge.

The media adviser noted that his boss remains unperturbed by reports of Senator Akume’s plans to once again instigate the transfer of the state Police Commissioner and also cause the removal of the Resident Electoral Commissioner in the State.

He urged Senator Akume to utilise the legal process if he feels aggrieved and not resort to lamentations in the media.