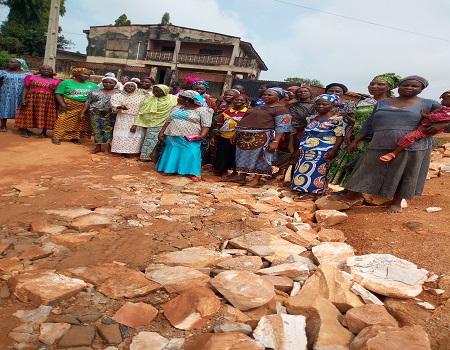 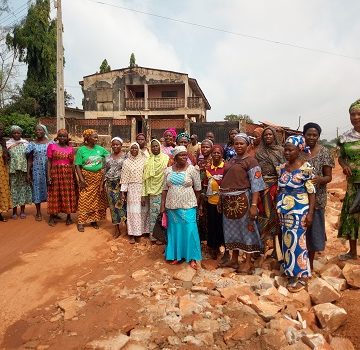 WOMEN living in the Orisunmibare/Ita Faaji axis of the Wire and Cable area of Apata in Ido local government area of Oyo State have taken over the repair of their community road.
They were seen, on daily basis, collecting a token of between N200 and N50 from motorists and commercial motorcyclists (Okada riders) as daily fees for the repair of the road.
Speaking with TribuneOnline, on Tuesday, on why they were the ones doing a job meant for the menfolk, they said they were no longer able to cope with the deplorable state of the main road linking their community with the other parts of Ibadan, the state capital.
They aimed to have spent over N400,000, being the amount they voluntary raised among themselves, at N3,000 per household within the community, to ensure the repair of the road which became especially worsened by torrential rainfalls.
ALSO READ: Anambra community choose your project initiative receives commendation
Many of the respondents further disclosed that they took over the repair following the failure of their husbands and male elders to do same, even after they cannot account for about N800,000 said to have been collected for the same purpose.
One of them, Madam Rafiat Adebola, said the hardship being faced daily by the people living in the community made the women decide to take over the repair of the road.

“We have made several appeals to the concerned authorities to help us to repair this road, especially the bad portions, including the Mouka Foam Junction, Orisunmibare Community Town Hall and Alahusa, down to Ita Faaji, but no help is forthcoming.
“We are suffering untold hardship as a result of the bad condition of this road. We are finding it difficult to go out and even come in because of the bad road. We are getting stranded, returning to our homes whenever we go out.
“Majority of us women in this community are not car owners but we have children who have cars and other vehicles. Their vehicles break down on daily basis and they spending fortunes repairing the damages caused on their vehicles by the bad road.
“Commercial vehicles are not plying this road and the Okada riders that usually ply the road from Wire and Cable to Ita Faaji are threatening to stop plying the road as they complain of damages and poor health conditions occasioned by the bad road.
“The situation became more worrisome when a pregnant woman was injured when she fell from an Okada recently. Another woman had her leg badly damaged when another felled her.
“We there and then decided to take our fate in our hand and started collaborating to ensure the repair of the road as things are becoming extremely difficult for us each passing day.
“Started by levying ourselves (women in each household within the community) by N3,000. Through that effort, we were able to raise about N300,000 which we used to buy 20 truckloads of stones and granites to start the repair work.
“However, the amount raised was not enough. We, therefore, resolved to start levying motorists and Okada riders N200 and N100 per day to raise more money. While some are cooperating, many others are not supportive.
“So far, we have bought about 20 truckloads of stones and granites and also loads of sand which we have used to fill the deep gullies at Mouka Foam, Orisunmibare and Alahusa.
“We still need more help and support. Thank God, the rains have stopped now. We are appealing to the people of the community, especially the state government to come to our rescue at Orisumibare/Ita Faaji Community.
Oyo-State
Share

Olunloyo, Gani Adams, Esuola, Olaopa, others to be honoured at 10th Oranyan festival…