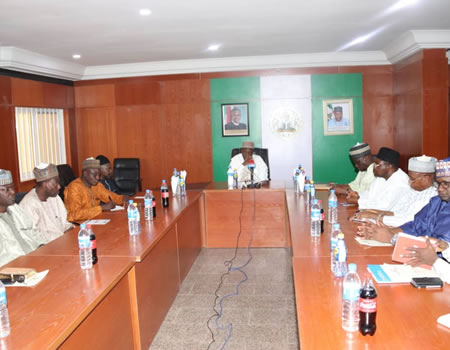 Organised labour in Gombe state has assured the State Government that labour will continue to partner with government in order to move the state forward, just as it commended the government under the leadership of the Governor, Muhammadu Inuwa Yahaya for carrying labour along in the running of the state affairs.

He praised the Governor for addressing the issues of the backlog of gratuity owed retired civil servants in the state, urging that such gesture be expended to the Local Government retirees.

The NLC Chairman also hailed the Governor’s foresight in constituting a 15-man minimum wage committee,  expressing optimism that with the disposition of Governor Inuwa Yahaya towards the workers, the government will implement the N30,000 minimum wage.

In his opening speech before the meeting later went into a closed-door session, Gombe State Governor, Alhaji Muhammadu Inuwa Yahaya, reiterated that his administration will continue to deepen the existing industrial harmony and cordial relationship with workers in the state in order to improve productivity and ensure good governance.

Inuwa Yahaya acknowledged the support of the labour union to his administration,  observing that, the trust and confidence started even before his election as Governor, urging that such partnership be maintained in the interests of workers and the generality of the public.

The Governor remarked that, ” I wish to acknowledge with delight that labour has been very supportive and cooperative with this administration. On our part, we are reciprocating this gesture, as our disposition is favourably disposed towards the welfare of workers, especially looking at the efforts we made in settling backlog of gratuity we inherited and the efforts in sanitizing the system to improve productivity in the service. We shall continue to cherish and maintain this cordiality”.

He further described the labour as partners in progress, assuring that his administration will not renege in its resolve to better the lots of workers and the citizenry in general.

The Governor said that the setting up of the 15- member Dr Manassah Jatau committee on N30,000 minimum wage is a demonstration of his Government’s favourable disposition towards meeting the yearnings of the workers in the state, especially as it affects wages and entitlements as contained in a statement by Ismaila Uba Misilli, Senior Special Assistant, Media and Publicity to the Governor.

Christian persecution: You got it totally wrong, CAN hits back at Sultan