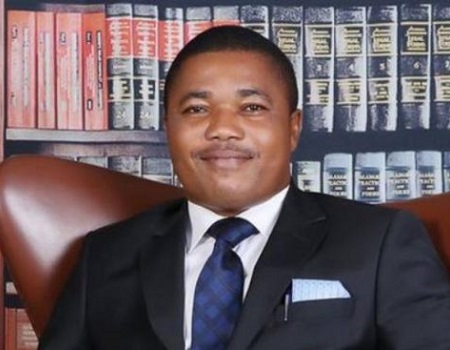 The embattled lawyer to Nnamdi Kanu, leader of the Indigenous Peoples of Biafra (IPOB), Barrister Ifeanyi Ejiofor, has denied all the allegations level against him by the Nigeria Police over the Monday killing of two of it men at Oraifite village, in Ekwusigo council area of Anambra state.

He said he is beautiful and a gentleman who does not look for trouble and that he has not committed any offence known to law.

Ejiofor’s denial of the entire allegations made against him by the Police was contained in his detailed statement, which was recorded and was made available to journalists in Awka, on Wednesday evening.

He said he never had an issue with anybody since he came home on 24th November, to the extent that he was indoor receiving visitors and sympathizers from all walks of life.

He alleged that he is being attacked and maligned because he has been defending the members of the Indigenous Peoples of Biafra and their leader Nnamdi Kanu.

It will be recalled that the Anambra State Police Command had through the Command Spokesman, SP. Haruna Mohammed, issued a public statement, declaring the IPOB lawyer wanted over the alleged offences of conspiracy and murder, as well as other felonious acts.

It was learnt that Ejiofor shunned the invitation to come and respond to a complaint that was allegedly lodged against him by somebody whose identity has not been disclosed.

He said the fact that someone made a complaint against him on the alleged offences is not sufficient enough to warrant security agents allegedly using force on the people they found in his premises.

He summed up his position on the issue, saying,” I am a lawyer with addresses. I have two chambers, one in Abuja and one at Anambra State and I practice. I am a very serious legal practitioner. I go to court almost every day. So I am not going to run away from the police.”

He maintained that it is important for him to emphasize that he has been in more than ten years of unbroken relationship with the police higher ranks, adding that police knows him as a peaceful man and as a gentleman and that he is not an enemy of the police

He maintained that he can not run away from the police because he has not committed any offence known to law.

He gave insight into the genesis of his problem with the Police.

According to Ejiofor, “I have been in all courts with them, in Abuja, Lagos, Port Harcourt, Akwa-Ibom, Anambra, Enugu and all other places. I have been in court with them and I defeated them in virtually all the cases I go against them.

Because IPOB members are merely exercising their rights as the Constitution provided and so the organization is not a terrorist organization.

These terrorists tag on them has been effectively challenged in the court of appeal. So I do not know where I have got it wrong.

So I do not know the offences I have committed for becoming a lawyer of IPOB. I do not know where I got it wrong. This is a person that has been at home since Sunday 27th of November 2019 till Sunday 1st of December 2019, when we went for the afternoon Church service.

I am calling on the Nigerian Bar Association (NBA), to also intervene. I have already made a contact with the NBA Chairman, Abuja branch, to also take it up. So I want this matter to be steadily investigated.”