[OPINION] CNN And The Soul Of Nigeria 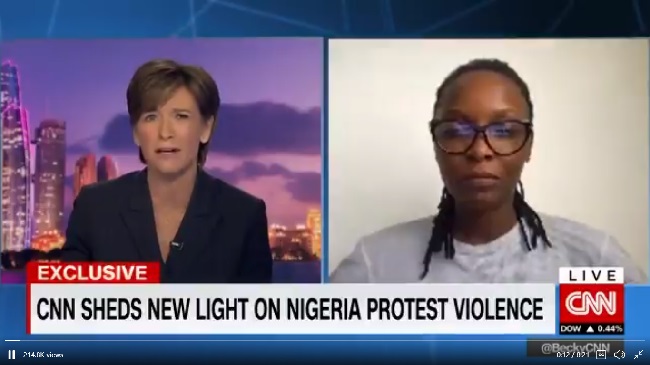 The recent video released by the Cable News Network (CNN) got me thinking about what we are up against in Nigeria. As I patiently listened to the narrative in the video and the accompanying pictures I was speechless for two reasons; one is the fact that the videos used by the CNN were not any different from what has been in circulation in Nigeria for over a month.

Secondly, the CNN relied upon the testimonies of a segment that were part of the protest that had failed integrity test on numerous occasions with regards to what transpired at the Lekki Tollgate and the number of casualties that were recorded.

It was just a charade intended to serve a purpose that is not in the interest of Nigeria as a country and the Nigerian Army as an institution. The plot was exposed the moment the CNN went as far as identifying where the Nigerian Military sources its arms and ammunition. That was indeed a red flag for me and an indication that some vested interests do not have the interest of the country at heart.

The CNN angle to the EndSARS protest is the beginning of an international dimension to the disintegration plot against Nigeria, which is anchored on spreading fake news. If this is not the case, I wonder what else to call it when a news medium such as the CNN would throw caution into the wind in its reportage of issues.

I am consequently constrained to ask this question: who is the CNN running errands for? Could it be crisis merchants that benefit from crises? Could it be some terrorist network? Could it also be some international arms dealers? All of these questions are begging for answers in my mind because of the desperation to undermine the Nigerian Military through the propagation of fake news.

We must admit that this is indeed the era of fake news, and we all know how fake news has destroyed countries and institutions across the globe. And the recent focus on the Nigerian Military indeed portends grave danger, and this threat must not be treated with kids gloves by the Nigerian authorities.

I won’t say I am disappointed in the CNN video because I indeed saw it coming when the various social media space became awash with fairy tales on a supposed massacre committed by the Nigerian Army at the Lekki Tollgate during the EndSARS protests.

That the numbers of deaths recorded kept increasing and decreasing at intervals is indicative of how everything centres on fake news. I stand to be corrected if indeed there was a massacre at the Lekki Tollgate, why then hasn’t there been a static figure on the number of deaths recorded and the families of the victims still in absolute silence? I am really amused and as well afraid of what would befall Nigeria if the proponents of fake news indeed have their way. I am also scared that the consequences would not be pleasant for us as a people and as a country.

The CNN angle might be the beginning of what to expect, given the revelations coming out of the Lagos State Judicial Panel of Inquiry and Restitution. Especially, with the various accounts of stakeholders tilting towards the fact that indeed the bulk of the news that made the rounds with regards to what transpired at the Lekki Tollgate cannot be substantiated with facts.

The testimony of the Nigerian Army at the panel didn’t also go down well with some vested interest hence the renewed onslaught against it. I am consequently forced to believe that the emphasis of the CNN with regards to the use of live bullets by soldiers during the protest is meant to counter the testimony of the Nigerian Army which indeed explicitly differentiated between live bullets and blank bullets.

This indeed ruffled some feathers. Understandably, a tough fight would be put up given the enormous resources that were devoted to the EndSARS campaign that ultimately failed in achieving its objective of causing a conflict of phenomenal proportion.

I also want to believe that the crime the Nigerian Army committed was intervening to save our democracy which was the overarching objective as it became unfathomable why the protest continued despite the government meeting the five demands of the protesters. From demanding for an end to police brutality and introducing reforms in the Nigerian Police Force to Buhari must go and other despicable demands.

I dare say the EndSARS protests upon hijack were a coup against democracy in Nigeria, and we must be thankful to the Nigerian Army for its intervention that indeed saved the day. Most Nigerians might not know this fact because it was well-conceived and funded that even the protesters themselves didn’t realise they were being used to stage a coup that would have effected a change of government through the back door. This was how precarious the situation was, and I am glad that we didn’t get to that stage because Nigeria would have been destroyed beyond redemption.

As I mentioned earlier, I do not know whom the CNN is running errands for. However, I am convinced that CNN is on an errand mission by spinning falsehood to discredit the Nigerian Military and the federal government. If this wasn’t the case, we should have been availed with exclusive videos and testimonies and not recycling of videos already in circulation, but this time around with foreign accent in its interpretation. This probably is intended to lend credence to the campaign of calumny against the Nigerian Military.

Interesting times indeed lie ahead, and Nigerians must at this point choose between standing in defence of the country or allow fake news merchants destroy all that we have and represent as a people and as a country. CNN should do better next time.

Onmeje is a public affairs analyst and wrote from the United Kingdom.

Obaseki who joined the Peoples Democratic Party (PDP) in June after he was disqualified by the APC, defeated Pastor Osagie Ize-Iyamu of the APC in the election results announced by the Independent National Electoral Commission (INEC) on Sunday.CNN And The Soul  CNN And The Soul

A Kano based industrialist, Chief Kalu Ogbonnaya, has advised the Federal Government to take necessary steps to stimulate the nation’s economy to prevent a recession post COVID-19.CNN And The Soul

Ogbonnaya who spoke in an interview with the News Agency of Nigeria (NAN) on Thursday in Kano, said as a result of the coronavirus raving the world, no business has been moving.CNN And The Soul